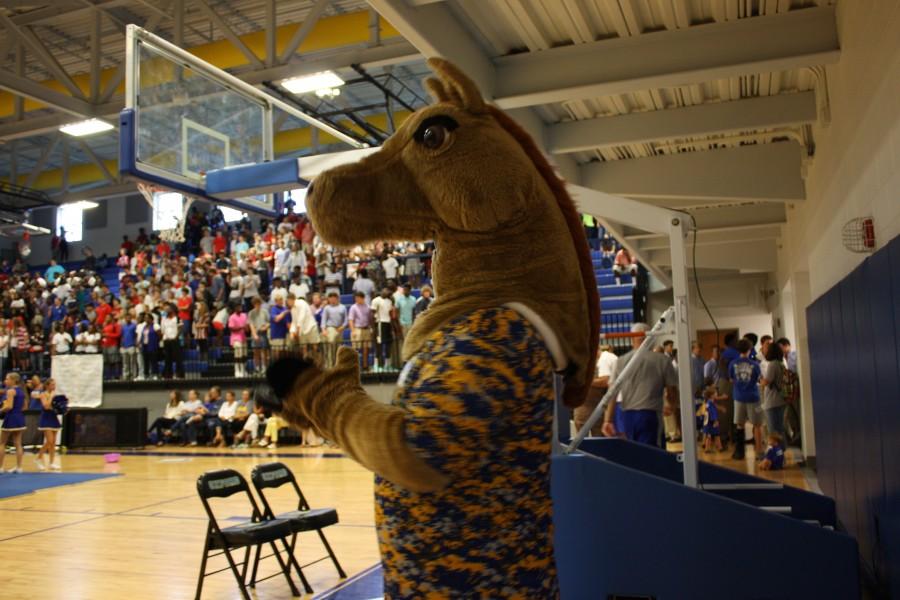 He enters the field. The crowd bolts to their feet, full of jubilation and excitement. He isn’t the quarterback or the coach.

No, he is Charlie the Charger, beloved mascot of Oxford High School.

This year Charlie has a new guardian. No longer is Tony Holland amping up the crowd. Junior Erik Sahlein has filled the hoofs of Charlie as the new mascot this year.

“I tried out because I’ve always been a little socially awkward, especially around girls,” Sahlein said regarding why he tried out to be a mascot. “Being the mascot has helped me get over a little bit of my social anxiety.”

After having been the mascot for two years, Holland was able to give Erik Sahlein advice about what important aspects he should work on when being the mascot.

This past summer, Sahlein attended a national cheerleading competition at the University of Alabama. He received an All-American status which helped his confidence coming into this school year.

“It’s incredible to think about, really,” Sahlein said in regards to his honor. “It’s definitely helped my confidence”

Sahlein is still new to being a mascot, but says that he has a couple of rules that he always follows.

“The golden rule is that you never take off the head,” Sahlein said. “It could be potentially scaring for young kids.”

Sahlein also explained the most important part of his role as mascot.

“Pumping up the crowd is more important than anything,” Sahlein said. “The whole goal of a mascot is to give your team and the fans of your team school spirit.”

Junior Mary Lauren Green has seen firsthand Sahlein’s work as mascot, as a cheerleader for Oxford High School, and concludes that he has done an excellent job so far.

“In my opinion, Erik has done a great job so far, and I know he will improve as the year goes on,” Green said. “It is scary at first to be in front of the whole student body, but once he gets comfortable and has a few more games under his belt, I have a feeling he will be one of the best mascots Oxford High School has ever had.”

“I think that Erik will develop a lot this year,” Wally said. “He has already improved a lot since this summer.”

Sahlein has now been the mascot for the first two football games of the season and feels that both have helped him feel more comfortable in his suit.

“It felt really good,” Sahlein said in regards to being the mascot for the most recent home football game, Friday night against Southaven. “It felt like I got a little bit more experience and got (two) under the belt.”

Sahlein is appreciative of the opportunity to be the school mascot, and has a motto that – Holland also shares – he always tries to remember.

“It’s an incredible experience,” Sahlein said. “I always try to remember, ‘If the fur ain’t flying, you ain’t trying.’”