OHS football rolls in opener despite not its best performance 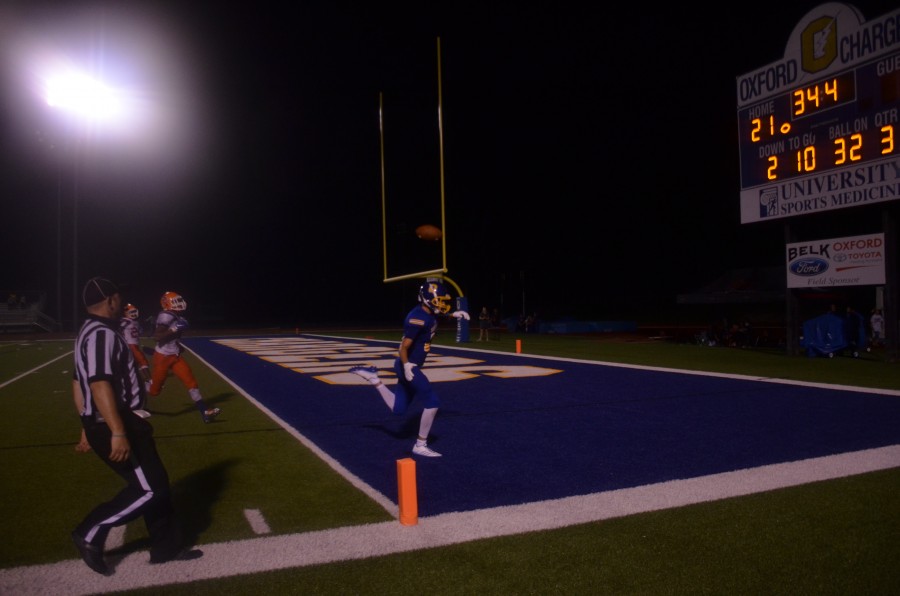 OXFORD – Not every opening game is pretty. Last Friday was no exception. Even 24 penalties committed by Oxford High would not change the outcome of the game.

Oxford started their 2015 campaign off on the right foot by shutting out Southaven High 35-0. For most teams, beating a great team 35-0 would be a great accomplishment. However, Oxford thought they could have done better, particularly on offense.

“We are a lot better than what we showed tonight,” said OHS senior quarterback Jack Abraham.

Said Abraham’s senior go-to target, D.K. Metcalf, “We really played terrible as an offense. Our defense really kept us in the game. Offensively, we just got to execute better. That’s what it boils down to.”

Metcalf scored the first touchdown of the season with a pass from Abraham from 27 yards out. Ken Presley and Barry Flowers each got a touchdown reception in the second half.

OHS defensive coordinator Steve Herring had some big shoes to fill on defense coming off of last season – the Chargers’ second of two MHSAA Class 5A state runner-up campaigns under co-defensive coordinator Jake Hill, who has since taken over the New Albany High program. His defense bended a little bit, but they did not break the entire night. Southaven threatened three times near the red zone. Southaven came back empty all three times with two lost fumbles and a Quay Quarles interception.

“This whole week we had a plan of coming in and shutting them out,” said OHS defensive end Korbin Harmon. “D-Line played hard, CBs, everything. Just an all-around good win.”

Turning point: Oxford still struggled with penalties, which limited Oxford’s offensive production. Midway through the third quarter, running back Drew Bianco really made his presence felt. Bianco shed multiple tackles running down the sidelines and galloped 31 yards for his second score of the game. The score was then 21-0, practically killing any chance of Southaven getting back into the game.

Playmaker: Most sophomores would get rattled playing in their first varsity game. Not Bianco. Bianco stepped up in a big way in the absence of Kenzie Phillips. He had 20 carries for 140 yards.

Talking Point: “I thought we played well at times and we played not so smart at times. We had way too many stupid penalties that we’ve got to get corrected, because you can’t beat a good football team like that. We’re very fortunate to win,” said Johnny Hill who is in his final year at the helm of the Oxford Chargers.

Notes:
Oxford had 194 penalty yards from 24 team penalties.
This week, the third annual “Little Egg Bowl,” featuring Oxford and Starkville, will be a primetime ESPNU matchup at 8 p.m. at Starkville High School.