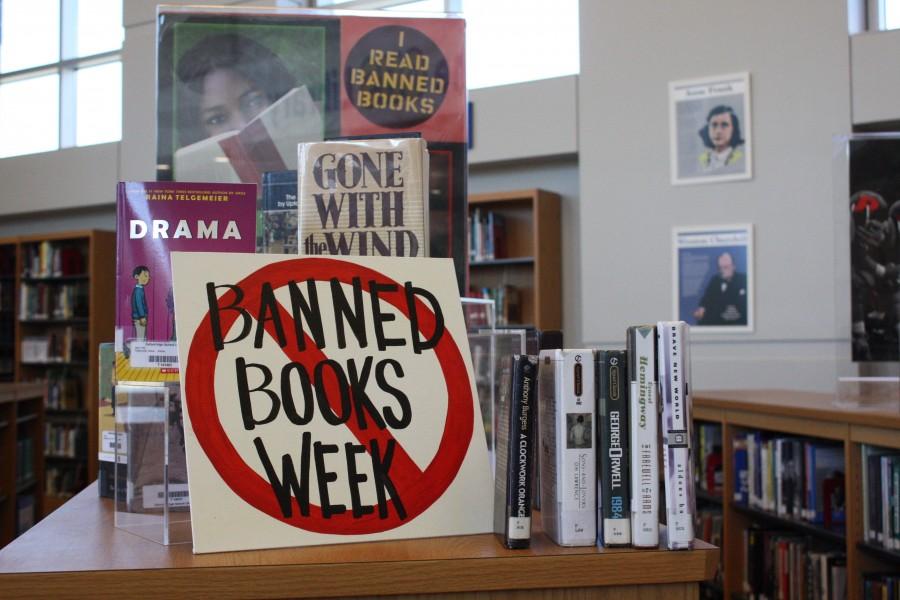 Books, and the knowledge that they impart, are vital to our society.  This is the core theme of Banned Books Week, an annual celebration of the freedom to read, which runs from Sept. 27 through Oct. 3.

According to the American Library Association, Banned Books Week highlights open access to information and emphasizes the dangers of censorship.

The OHS library has gotten involved in the celebration with a display that showcases books that are available in the OHS library that have been banned at other libraries.  Among the banned books being displayed are: “Brave New World” and “1984” by George Orwell, “The Grapes of Wrath” by John Steinbeck, “A Clockwork Orange” by Anthony Burgess, “Gone with the Wind” by Margaret Mitchell, “As I Lay Dying” by William Faulkner, and “A Farewell to Arms” by Ernest Hemingway, among others.

“I have a banned books display and I’ve invited teachers to bring in some of their classes to do a banned books project,” OHS librarian Lynndy Hurdle said.

The weeklong celebration draws awareness to books that are challenged, as well as banned.  A book is challenged when someone speaks out against a book that is carried by a library, and a challenged book is in danger of becoming banned, or removed from a library.

The top three reasons that books are challenged, according to the American Library Association, is for using offensive language, containing sexually explicit content, and being unsuitable for a particular age group.

There, she witnessed a book being challenged.

A student at the school checked out a book which contained inappropriate content.  The book was passed around to several different students, until, finally, a parent got ahold of it and gave it to the principal.  Hurdle discovered that the book had been confiscated by the principal when she was tracking down overdue books.

She was compelled to commence the American Library Association’s standard procedure for a challenged book, which is for the challenger, in this case the parent, to fill out a form, which would be investigated by a committee formed by the school.  However, the book was eventually put back on the shelf, because the parent failed to complete the challenge form.

“I don’t think that the library should censor,” Hurdle said. “I think that each person should make his or her own judgements about what they want or should be reading.”

Junior Olivia Carpenter, a member of the OHS book club, also said that it is important for people to have access to books.

“I don’t think that any books should be banned because people have the right to form their own opinions and read controversial things,” Carpenter said.

Additionally, the American Library Association has a ‘Library Bill of Rights,’ which states that libraries should challenge censorship to fulfill their responsibility of providing information and enlightenment.

“I do think that some materials are not suited for certain ages or groups of people, but I don’t think that it’s the library’s job to police that,” Hurdle said.

Freshman English teachers have recently assigned their students the book “Speak” by Laurie Halse Anderson, which, coincidentally, has been on some banned books lists.

“Whether that was intentional or not I don’t know, but it did work out pretty beautifully,” Brown said.

Brown feels that one of the best parts of Banned Books Week is that students are able to read and discuss books that may be banned at other schools.

Brown said that it is important that students have the freedom and opportunity to explore different books and learn from them.

“The options are limitless when you walk in the library,” Brown said. “You get to explore all different worlds … to highlight that has been a passion of mine.”

Since she was the library assistant for the past two years, Banned Books Week has been especially significant for her.

“I learned so much in the library as far as the importance of reading,” Brown said, “and it really sparked an interest in me to show the students, ‘Hey, you have the freedom to read.  You have the freedom to explore all of these books and to learn from them and gain new experiences and insights.’”