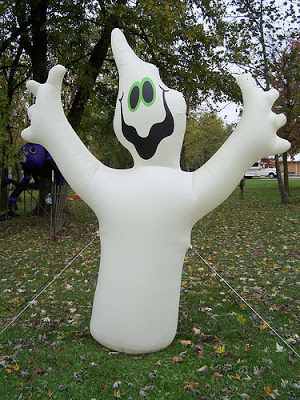 A chill breeze, a dark and stormy night, and a very large blowup ghost in the neighbor’s yard.  The three can combine to mean only one thing…it’s time for Halloween.

During October of the 2014-2015 school year, students and teachers were visited by their first mysterious presence: Casp.  Casp spent most of her time in the science building forming a tight bond with Chemistry teacher, Nose Rash.

Based on Casp’s choice of words and translucent figure, many choose to called her a ghost.  Students and faculty may also fail to realize the best term for Casp and her people.

“We prefer phantom visitors (PV), as to not discriminate,” said Casp.

On Nov. 1, 2014, Casp made the choice to leave OHS and reside in the Water Valley High School bathroom.

On Oct.  26, 2015, a new PV chose to make his presence known in the History hall stairwell.  The dangers of this new visitor are still unknown, but a select few have been chosen by the PV to be an ear witness.

“He is much scarier than the last PV.  Instead of yelling ‘Boo’, he yells much more horrifying statements such as, ‘Your GPA’ and ‘College tuition’,” said junior, Gamille Cladden.

Authorities have not been able to locate the new PV, but for now, administration is choosing to refer to him as John Dracula.  Dracula has yet to be located, and student safety risks are still to be determined.

Health teacher and PV activist, Lodd Tiddell, said, “To avoid any unwanted confrontation, it is best to not engage with a PV unless they engage with you first.”