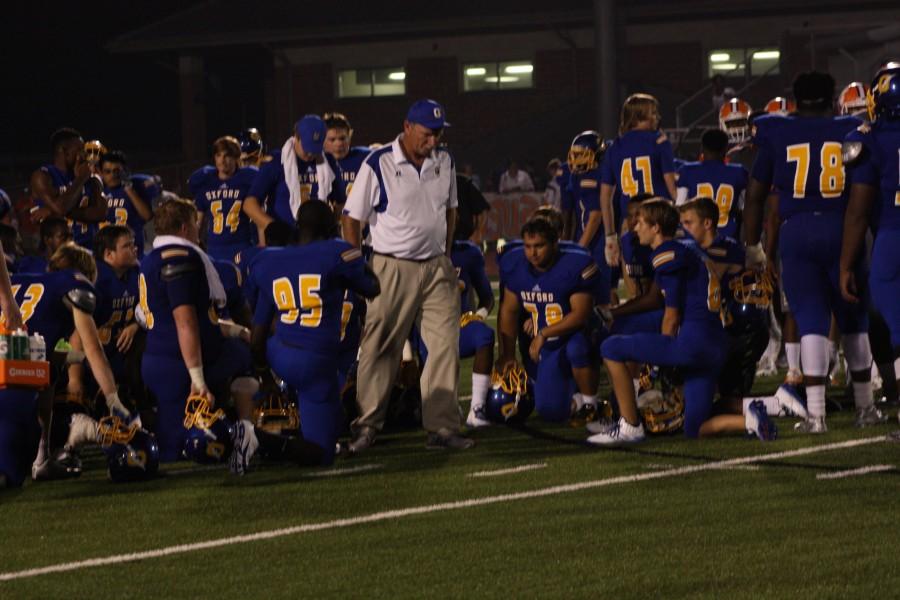 FILE The Chargers, with one more division game to play, have already clinched the division.

The Chargers, with one more division game to play, have already clinched the division.

OLIVE BRANCH – Oxford High continues to dominate in division play with another 20-point win, but it was not easy at times on Friday night.

The Charger offense lit up the scoreboard and the defense did just enough to defeat Center Hill High, 54-30. With the win, the Chargers clinched Division 1-5A and earned a first-round home playoff game.

“We’re still not where we want to be yet, but we are getting there,” OHS head coach Johnny Hill said.

It was another milestone night for Jack Abraham. Abraham surpassed the 10,000-career-passing-yard mark.

“Jack got 10,000 yards, but you’ve got to understand that (offensive) line gave him time to throw and those receivers had to catch the ball,” Hill said. “Even though Jack gets that honor, it’s to the whole offense.”

Abraham completed 23 of his 28 passes for 396 yards and six touchdowns.

Senior Ole Miss commit D.K. Metcalf had a career-high 186 receiving yards to go along with his seven receptions and three touchdowns. Zach Cousar, Ken Presley and Jimmy Greaser each had a touchdown catch, with a combined 11 receptions for 134 receiving yards.

“We just knew that we had to make a couple of changes,” D.Q. Thomas said. “We had to contain him (Ellington) in the box and that’s what we did.”

The Chargers forced one turnover, a fumble, which was recovered by Kent Hickinbottom.

It took a while for both teams to score points in the second quarter after the foot race in the first quarter. Wadlington plunged in from two yards for a touchdown with 4:09 left in the half. Ellington and the Mustangs were determined to score points before the half. The Mustangs were faced with fourth and 7 near the red zone. The Chargers held firm and forced a turnover-on-downs with 19 seconds left in the half. The Chargers wouldn’t be denied after that stop. The score at the half was 26-17 Chargers.

Metcalf was a handful for the Mustangs’ defense, getting 26 yards a catch. Metcalf had touchdowns of 50, 35 and 64 yards. On two of his touchdowns, Metcalf was covered by his cousin, yes, the Mustangs’ star player, Dan Ellington.

“We can’t let up,” D.K. Metcalf said. “Just because we’re region champs doesn’t mean that we can sleep on anybody; anybody can get beat on any given night. So we’ve just got to come out and just compete every Friday.”