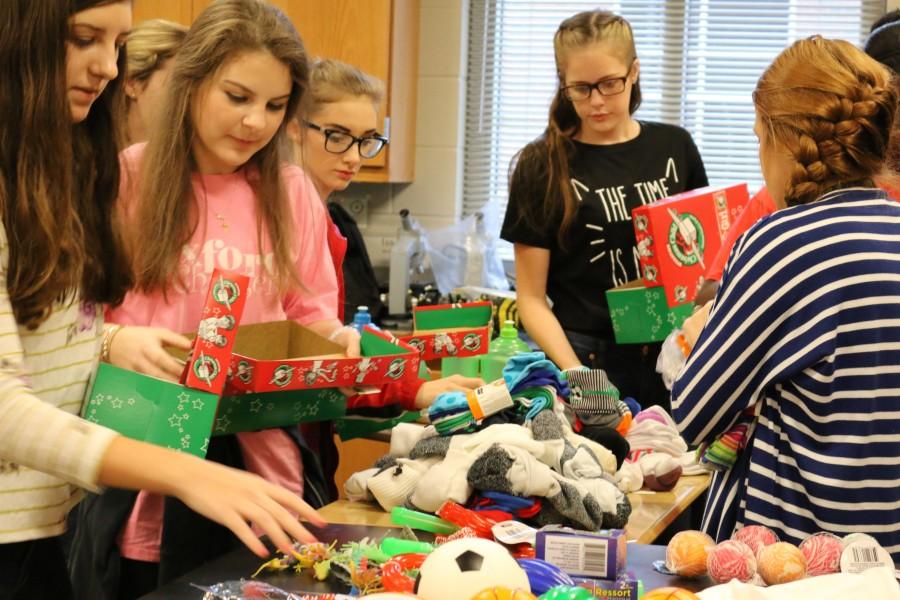 Christmas music was in the air on the morning of Nov. 5 in Oxford High science teacher Nicole Roberson’s classroom.  The Beyond Our Walls club members were busy packing more than 70 boxes full of items such as socks, toothbrushes, toothpaste, coloring books, play dough, stuffed animals and candy.

The Beyond Our Walls club was established at the beginning of this school year by junior Virginia Coleman and sophomores Alice McCullen and Evelyn Smith.  It focuses on Operation Christmas Child, a project devoted to sending Christmas presents to less privileged children around the world.

“There are so many kids that don’t have the opportunities that kids in our community have,” Roberson said. “It gives us a chance to really give back to those who may not receive anything else during the holiday season.”

Due to the Christian roots of Samaritan’s Purse, Operation Christmas Child’s parent organization, the club is also dedicated to spreading the Christian faith.

“It’s kind of heart-warming that we get to help others from all over the world have Christmas and spread Jesus’ love for them,” Coleman said.

Nov. 5 was the club’s first packing party, and it was done assembly-line style.  Each type of item was separated so that when the students lined up, every student placed at least one item from each station into their box.

The students started by taking a box, choosing a label that indicated either “boy” or “girl,” and marking which age group the box was for.  Then, they got in line and selected one item from each of the different stations: socks, toys, hygiene products, art supplies, play dough, candy and letters.

“It was just really neat watching them as they packed the boxes,” Roberson said. “They put a lot of thought into the specific box that they were going to be putting things into … . They were handpicking things for this child that they would probably never get an opportunity to meet, but get to share something with.”

During club meetings, students wrote personalized handwritten letters to put inside the boxes, which “tell a little bit about who they are,” according to Roberson.

The club plans to have at least two more packing parties before collection week, Nov. 16-23.  However, they will need to have some more donations before they can finish packing all of the boxes, with their goal being 200 boxes.

“We planned to have more than one packing party so that we could see how far that stuff that we had would get us, and it turns out we’re actually going to need a lot more stuff than we thought we would,” McCullen, president of the club, said.

Luckily, students, teachers and even local businesses have stepped up to donate.

Dr. Hayden Perkins of the Children’s Dental Center donated toothbrushes and toothpaste to the club, and Larson’s Cash Saver donated food items for the club’s homecoming carnival bake sale, which they used to raise money for the shipping cost of $7 per box.

They have a website as well, on which anyone can donate to help pay for the shipping costs.

When they finish packing the boxes, they will be taken to First Baptist Church in Oxford and then sent to Atlanta, Georgia, where they will undergo inspection, before being sent to their final destinations.

For now, Roberson and Beyond Our Walls club members hope to have more donations before the boxes must be sent.

“I really think that everybody will help with our last little push to get stuff in,” Roberson said.