Beyond Our Walls succeeds in inaugural campaign 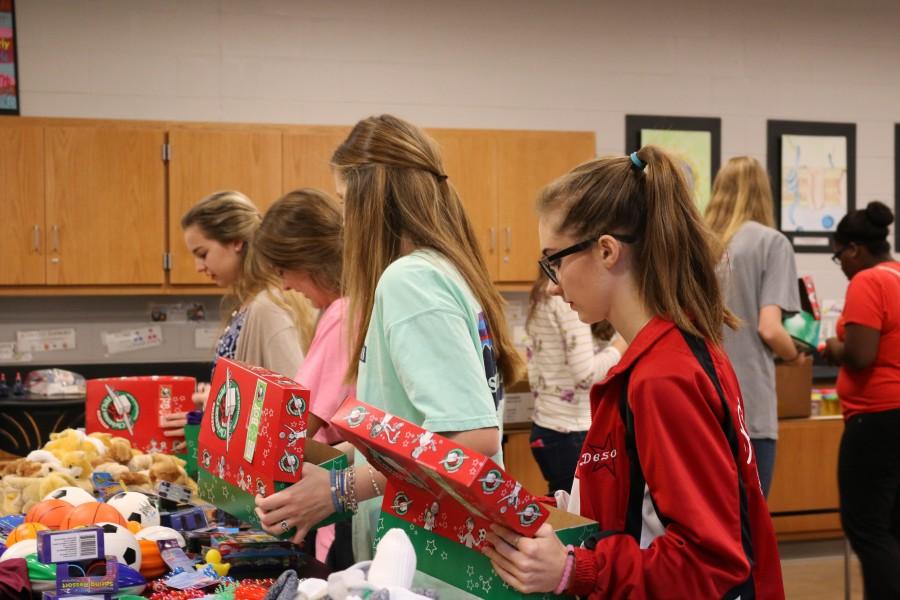 On Nov. 19, 155 boxes stuffed with socks, toys, hygiene products, art supplies, play dough and candy sat in Beyond Our Walls club sponsor Nicole Roberson’s classroom.  They were waiting to be picked up by sophomore Alice McCullen and her mother Beth McCullen to be taken to First Baptist Church, the Operation Christmas Child collection center for Oxford.

From there, they will be sent to one of the following places: Angola, Belize, Burking Faso, Cameroon, Central African Republic, Chad, Democratic Republic of Congo, Haiti, Mali, Peru, Philippines, Republic of Congo, Tanzania, or Zambia.

Although the Beyond Our Walls club packed 155 boxes, their goal was 200.

“I was worried that might be too big, but we wanted to set our goals pretty high,” Roberson said.

The club packed 100 boxes pretty quickly, but then ran out of boxes and had to rely on students bringing them in.  They received an additional 55 boxes that way, but still had leftover items.

“We still had lots of flip flops and socks, toys, lots of hygiene items, lots of things that could be used to fill the boxes,” Roberson said.

Those items will be taken to the Atlanta processing center along with the packed boxes, and will be used “to fill other boxes that aren’t packed as well,” according to Alice McCullen.

“We did have enough items, we just didn’t have enough boxes, so that’s what kept us from meeting our goal,” Alice McCullen said.

The club members made sure that all of the boxes that they filled were completely stuffed with items.

“We wanted to make sure that all of the boxes were packed full,” Roberson said.

Some of the shoeboxes that were donated by students were much larger than the pre-made shoeboxes that the club had gotten from Samaritan’s Purse, the organization that runs Operation Christmas Child.  In these cases, the club members filled the larger boxes with twice as many items, so that the children who receive those can “share with another child that might not get a box of their own, or share with a family member,” according to Roberson.

Operation Christmas Child is a project that is close to Roberson and the club members’ hearts.

“This year with beyond our walls it really helped me understand, not only the impact that the children that receive the box are getting, but how much it impacts me,” sophomore Sara Katherine Waller said.

“The box that some of us put together might be the only Christmas present, the only message of God’s love, that they receive,” Roberson said.  “That’s a pretty big thing.  It could be a life-changing event for some of these kids, and it’s really awesome to know that you get to have some part in that.”