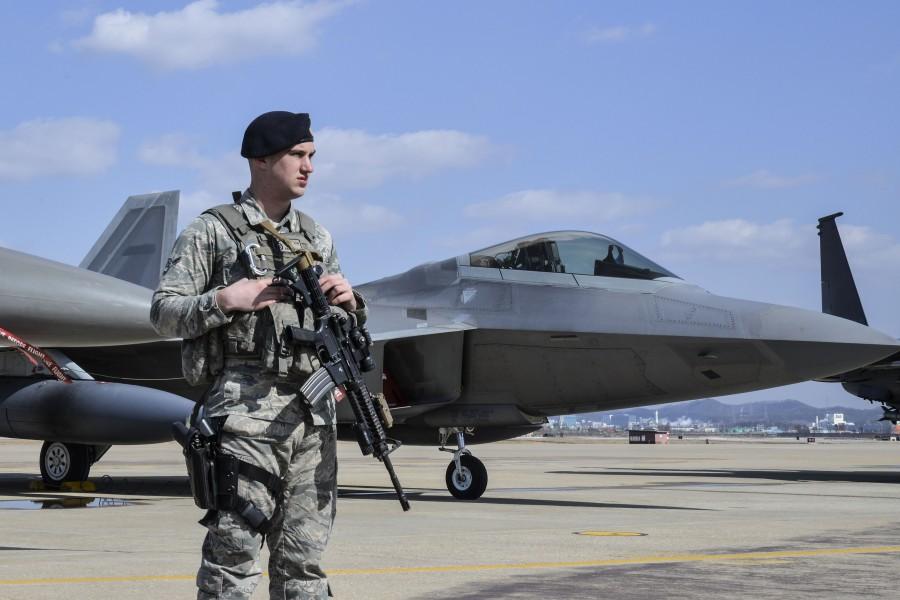 An Air Force Security Forces member stands guard next to an F22 Raptor fighter aircraft from Kadena Air Base, Japan, after it conducted a flyover in the vicinity of Osan Air Base, South Korea, in response to recent provocative action by North Korea, Feb. 17, 2016. It was joined by three other Raptors, four F-15 Slam Eagles and four U.S. Air Force F-16 Fighting Falcons. The F-22 is designed to project air dominance rapidly and at great distances and currently cannot be matched by any known or projected fighter aircraft. (U.S. Air Force photo by Tech. Sgt. Travis Edwards/Released)

With the 2016 United States presidential election just nine months away, several hot talking points have become common conversation pieces around the nation. With the U.S. federal deficit hovering around $18 trillion, many people are looking at federal spending to be addressed by the candidates.

The United States spends a lot of money on the military, but during a time of unrest at home and abroad, some people consider it to be a necessity regardless of the impact it has on the financial state of the nation as a whole. The U.S. spends around $600 billion dollars a year on the military overall, including the Coast Guard and Peace Corps. When asked whether this level of spending was warranted, a lot of OHS students were steadfast with their response.

“We need the finances to buy the weapons and supplies we need to fight. We have to be prepared at all times or we will lose if we go to war with another country,” senior Keenen Thompson said.

It was also suggested by a sophomore who wished to remain anonymous that we look at other ways to decrease our spending.

“We spend billions and billions of dollars on welfare, medicare, and medicaid; we need to cut some money out of those instead of cutting the military,” the sophomore said.

The U.S. military has come under a lot of fire in recent decades regarding spending. A perfect example is the F-35 Joint Strike Fighter program that the Department of Defense and the U.S. Air Force started around the turn of the 21st century. The F-35 program will cost about $1 trillion after it is completed, but federal officials and many Americans still consider it to be worth the cost because it is cutting-edge aviation technology.

“It’s important to keep spending enough money to fund our military,” junior Ryder Green said. “If we do not properly fund the military, then we stand a chance of losing wars and we risk being attacked by another country.”