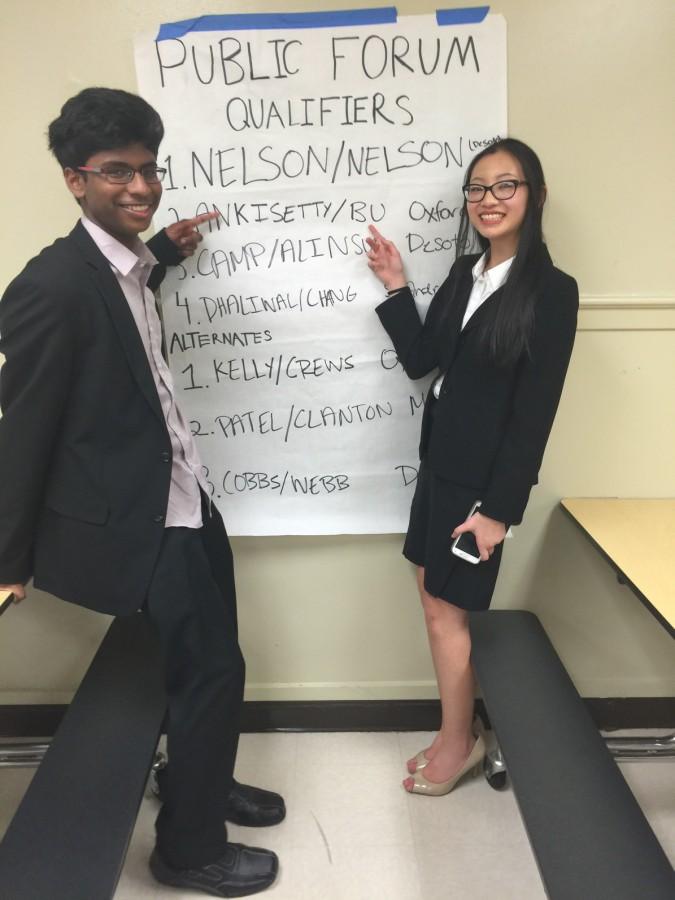 Last weekend, the Oxford High School debate team competed at the JCFL National Qualifying tournament in Jackson. There, four Oxford High School students qualified for nationals and will be competing in Sacramento, California, this May.

For both teams, placing in the top five teams was a surprising accomplishment.

“Well, going into the tournament, we didn’t think that we would do as well as we did,” junior Battle Crews said. “We definitely didn’t expect to qualify for the national competition.”

Originally, Crews and Kelly were the first alternate, but when a team was unable to compete in May, they were bumped up and allowed to compete at the national event.

“When the fourth team was not able to go, we got to move up to fourth place,” Crews said. “We are really happy we get to go.”

For sophomore Joanna Bu, qualifying for nationals was originally not even in the realm of possibility for her and her partner Ankisetty.

“It honestly feels amazing to qualify,” Bu said. “At the beginning, I honestly didn’t think my partner, Nitin, and I were going to qualify, because we lost a few times at previous tournaments.”

This will be Bu’s second time attending nationals (she competed in Fort Lauderdale, Florida, last summer), so she is well aware of the preparation needed prior to competing at nationals.

“There will be some tough competition at nationals, so I will be preparing and researching 10 times as much as I usually prepare,” Bu said.

Both teams are looking forward to competing in California, and have high hopes in their abilities to compete nationally.

“Especially since we are a Mississippi team, we are not expecting to win or anything,” Crews said, “but we are hoping to at least make it to the quarterfinal round.”

For Bu and Crews, traveling to California is an added bonus to competing at nationals.

“It’s gonna be pretty cool to go to California,” Crews said. “It will be my first time in Sacramento.”

Said Bu, “I want to have fun at nationals and enjoy California.”

Debate coach Barbara Lowe is similarly excited and confident in the performance of her students and their abilities.

“If the students understand the ins and outs of the case and arrive ready to compete, they have as good a chance as anyone else in the country at advancing,” Lowe said.