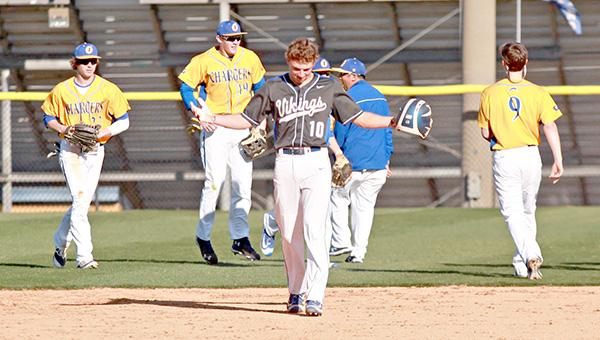 Warren Central’s Brooks Boolos (10) shrugs his shoulders as Oxford’s players celebrate behind him Friday. Boolos was robbed of the game-tying hit by Oxford right fielder Houston Roth for the game’s final out, and Oxford escaped with a 3-2 victory. (Ernest Bowker/The Vicksburg Post)

Three Oxford High sports teams participated in games this weekend in the Jackson metro area, and each received less than par results. Both the Lady Chargers and Chargers basketball teams were eliminated from their respective state tournaments, and the No. 1-ranked baseball team in the nation dropped their first game of the season in a surprise upset.

The boys basketball team, led by junior guard Jarkel Joiner, faced MHSAA Class 5A powerhouse, Wayne County, which eliminated the Chargers in the state tournament last year, and also knocked the football team out of a state championship this year.

The War Eagles were significantly bigger and more physical on the court, and it showed throughout the first half. After one quarter, the Chargers were down, 16-4.

However, the tide turned in favor of the Chargers when their press defense and more effective shooting proved benefactor. They managed to overcome an early deficit, and even climbed back to tie the game at 43 with thirty seconds left.

The 11th hour push was not enough for the Chargers, as Wayne County managed to strip junior guard Terry Williams and force a Charger loss.

The Chargers never led for the entire game, and ultimately lost 45-43, finishing the game with a 30.4 percent field-goal percentage.

“It was a crazy game,” Joiner said. “It was up and down, and it was very low-scoring. We didn’t shoot from the field good enough and ultimately we lost.”

The Lady Chargers suffered a similar fate to their male counterparts in Jackson – a crushing loss to Hattiesburg High to end their season.

The Lady Chargers were the winners of 17 straight games, and had yet to lose in 2016, when the Lady Tigers ended that streak.

The Lady Chargers were down for the majority of the game, but made a late comeback near the end of the third quarter to provide a glimmer of hope for their season.

However, the Lady Tigers ultimately prevailed, and ended the Lady Chargers’ season with a 49-42 win.

“We didn’t necessarily come in with big heads, but we expected to win,” junior Maggee Hobson said. “The outcome was just heartbreaking.”

The nation’s No. 1 team and heavy favorites to sweep the table this weekend fell to one of their opponents and squeaked by two more.

The Chargers opened the Mid-Mississippi Classic in Pearl with a win over 6A Warren Central, although the outcome depended heavily on a diving save by right fielder Houston Roth, to save the game and close it at 3-2.

The Chargers then traveled to Brandon where they first faced Hillcrest High School out of Alabama. The Chargers managed eight runs through two innings to take a large lead, but struggled the rest of the game, and ultimately blew the lead due to fielding and throwing errors. Hillcrest walked out of Brandon with an underdog win over the nationally-ranked Chargers, taking the gem, 9-8.

The third and final game of the weekend for the Chargers was against Brandon High School, another 6A opponent. The Chargers started off slow, but led by pitcher Jason Barber, were able to widen the gap and get the win, 7-3.

“I wasn’t happy,” junior Carson Stinnett said. “We should have won that game, but we lost it ourselves because of our defensive play. All in all, we did go 2-3 against some very good teams, but we definitely should have won all three.”