The Charger Online • May 2, 2016 • https://thechargeronline.com/3228/entertainment/sports-production-team-wins-southeast-emmy/ 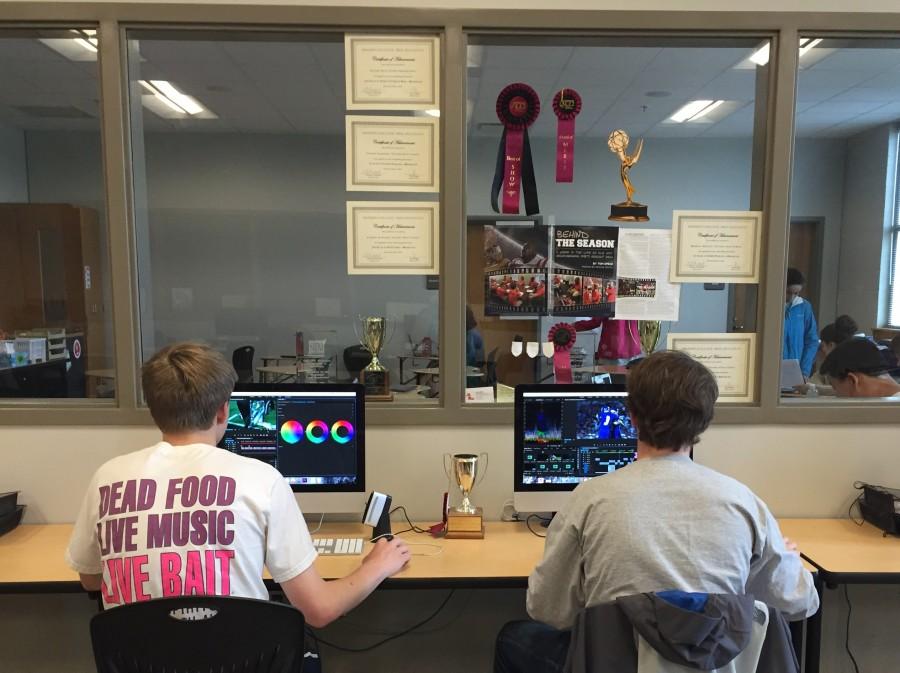 One idea quickly turned into an EMMY® award-winning program.

Last week, an idea that originated in the late spring of last year led to Oxford High sophomores Merrick McCool and Andrew Gardner receiving a student production EMMY® for a high school sports program from the Southeast EMMY® Chapter of the National Academy of Television and Science.

Starting off as just an idea, McCool and Gardner turned promo videos into a series of episodes focusing on the seasons of the OHS football and baseball teams.  McCool hoped to mimic the style of the series that the University of Mississippi produced, which focused on its football team.

“It was really good meeting with the Ole Miss guys, Chris Sabo and Micah Ginn,” McCool said of the producers of “The Season: Ole Miss Football.”  “They kind of led us in the right direction.  They helped us figure out what we are supposed to do with the episode and how we are supposed to set things up.”

Meeting with “The Season’s” staff at Ole Miss was helpful to McCool and Gardner, but guidance was not the only thing needed to film the award-winning production. Though limited with aged technology and equipment, the two were able to work with what they had to get to where they are today.

“It has been tough kind of tough,” McCool said. “We were given two cameras; one was OK and the other was not so good. We used what we could.

“We have bought a few things now, but we are asking for a budget next year to get some new cameras and new equipment.  We are hoping we might get it after winning this award.”

New equipment would mean better shots and video, as well as a wider range of coverage for the sports production team.

The plan had not always been to enter to win an EMMY®.  The plan was to film Oxford High athletics, develop a series, and grow a staff to help expand the possibilities of the program.  Along the way, though, McCool and Gardner were encouraged to enter the contest for a student production award.

“Ole Miss enters into the same competition but for professionals,” McCool said. “We looked into what they do, and we found out about the student production awards.  We won for the first episode of ‘The Season: Oxford Baseball.’”

Not expecting to win such a prestigious award, they did know that the series they were producing were unlike any that their opponents produced.

“We haven’t seen anywhere else that does a weekly sports program,” McCool said, “other than the stuff that rips off ESPN or something that is kind of a parody.  We are actually doing documentary work rather than just a coaches’ show or a highlight reel each week.

“We actually have a storyline with it, which most schools don’t have.”

Gardner is proud of his accomplishments so far and is hoping to see the program grow in the future.

“The football and baseball teams did all the heavy lifting,” Gardner said. “They made the big hits, steals, and touchdowns.

“All we had to do was press record, but it feels like a lot of hard work and late nights paid off.  I’m so proud to be a part of the beginning of an award-winning program. I hope that the legacy that Merrick and I have started is continued long after our graduation.”

Administrator Duncan Gray is also proud of how accomplished McCool and Gardner have become in a single school year.

“I think it’s a testament to what can occur when students are allowed to take some creative risks.  OHS had never tried a project like this, so there was a little uncertainty about what it would look like and what the guys would be doing throughout the year.  However, they had a great idea, and the ability to have a vision of what they wanted to do allowed them to see the project through.  I couldn’t be more proud of them.”