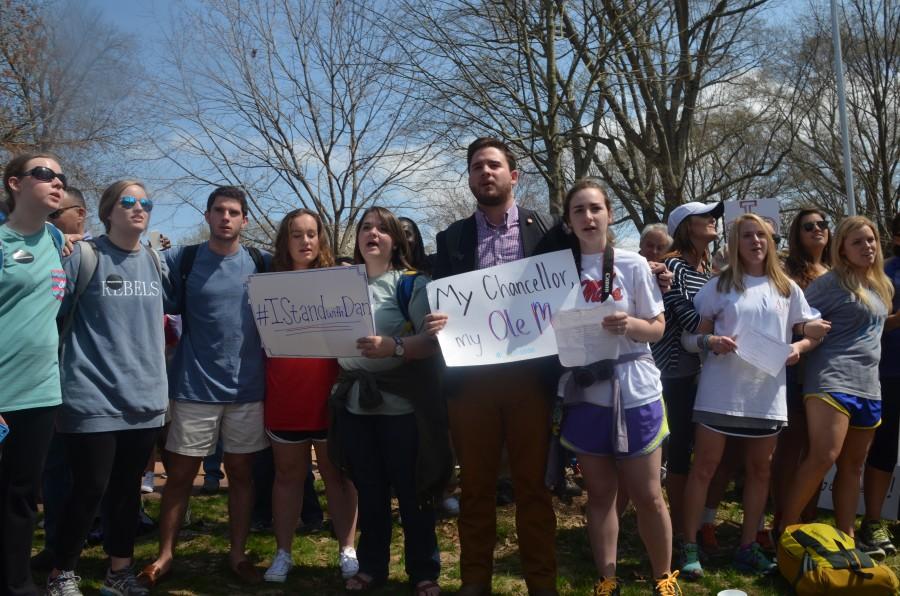 That is what people witnessed on the Ole Miss campus, in front of the Lyceum, as spirited students and faculty protested the decision made by the Mississippi Board of Trustees for the Institution of Higher Learning(IHL) not to renew Chancellor Dan Jones’ contract for the next four years.

The support was astounding. A reported roughly 2,500 students, faculty, and members of the Oxford community gathered in support of Jones.

The protest began with Phillip Waller, the director of communications for Students for Dan Jones. He expressed his gratitude to the students, faculty, and alumni that have supported the campaign for the renewal of Jones’ contract.

“We are incredibly excited of what we have been able to achieve,” Waller said, in his speech, about how quickly the rally was funded. “To the Ole Miss Students who have proven that they are not willing to take a decision of this magnitude sitting down, we thank you … . To the faculty senate who have been so instrumental in organizing support from the faculty, we thank you … . Next, we have to recognize the staff council who have also been an integral part of this event today … thank you.”

Waller then expressed his gratitude to the alumni such as Robert Khayat, Archie Manning, John Grisham, and Charles Overby, who have each voiced their support for Jones.

Waller then explained that this would not be the end of the fight to keep Jones as the chancellor.

“For all that Chancellor Jones has given to this school, we are obligated to give something back,” Waller said. “We stand together as people who want our university to work with us … . We have come a long way, but there is still a long road ahead. Today is not the end of this movement.”

The Creed “is what we believe Chancellor Jones stands for.”

Ryan Felder, co-organizer of the rally, then gave an empowering speech about who Jones really is.

“What of the man who had a dinner at which he was a speaker simply go around and clear people’s plates after they had finished?

“What of the man who writes a thank you note to everyone he feels indebted to? What of the man who has instilled in students, faculty, and staff the desire to put the needs of others before themselves? Isn’t that the leader that this campus needs?…I beg the IHL to help me understand their decision not to renew the contract of Jones. Help me understand why financial issues are enough to tarnish the legacy of this courageous and humble leader. … I ask would you kindly reinstate Chancellor Jones.”

Following Felder’s speech, Pierce Crossland, president of the University of Mississippi Associated Student Body, read the resolution written by the ASB regarding Jones.

“By passing this resolution, we hope to create a dialogue between the students at the University and members of the IHL in Jackson,” he said.

“The Senate of the faculty of U of M is shocked and extremely disappointed to learn that the Mississippi Board of Trustees of the State Institution of Higher Learning decided not to renew the contract of our exceptional leader, chancellor Dan Jones … .” Barnett said.

“The Staff Council of the U of M calls on the IHL Board to share their support of our students,” Hill read, “faculty, and staff by renewing the contract of Chancellor Jones and allowing the U of M to continue moving forward … .”

Following Barnett’s speech, Eloise Tyner lead the crowd with two chants. The first was “Doctor Dan, He’s Our Man, We Won’t Let this Decision Stand,” and was followed by “We Stand With Dan!”

Next the crowd was told to lock arms and sing the alma mater lyrics, creating a united front of support for Jones.

Allen Coon then took the stage encouraging people to pull out their phones and take a picture posting it to social media.

“This whole movement has been funded on social media and we need all of your help to keep this momentum running,” Coon said.

The rally ended with one final chant: “Hotty Toddy!”