Kendricks gets ready for Rio Olympics 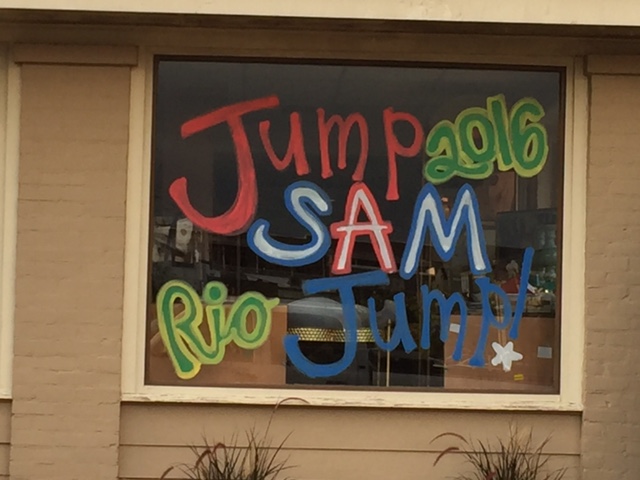 A local Oxford business has a "Jump Sam Jump" design on the window.

Faster, higher, stronger.  That is the Olympic motto and that is exactly what it took for Oxford High School alumnus Sam Kendricks to get to a stage that every athlete dreams about, competing at the Olympic games.  After jumping 19 feet and 4.75 inches and breaking the US Olympic Trials record, his goal finally became a reality.

“I’m not surprised to see Sam being as successful as he is just because he has always had a fantastic work ethic, he has always had a level of determination about himself in everything that he has done that really outmatches those that are around him,” OHS principal Bradley Roberson said.

“Sam is a testament to what hard work does,” OHS track and field head coach Chris Bush said.  “He and his dad have been working on this journey of developing and becoming one of the best and that hard work, it’s time for it to pay off.  I’m proud him, I’m proud of the opportunities he’s earned.”

Kendricks will compete in the Rio Olympic pole vault qualifiers on Saturday, August 13 at 6:20 p.m.  The finals in the pole vault will be Monday, August 15 at 6:35 p.m.

His long road to Rio all began at Oxford High School, under the direction of his father, Scott Kendricks.  Scott Kendricks led the Charger’s boys track team to five state championships during his long tenure.  While in high school, Sam was not only a superstar in the state of Mississippi, he was relevant on the national stage.  His personal best of 17 feet placed in the top 10 best heights in 2011.  Kendricks is still Mississippi’s all time record holder in high school pole vault with his personal best jump.

Kendricks chose to stay home and go to college at his father’s alma mater, The University of Mississippi.  It did not take long for Kendricks to be successful on the collegiate level.  In just his freshman season with the Rebels, Kendricks garnered second team All-American honors, the first Rebel pole vaulter to finish All-American since Baker Vinci in 1985.  He set the Ole Miss pole vault record in just his first year and later finished 10th at the NCAA Outdoor Championships that same year in 2012.  Kendricks’ sophomore and junior campaign’s consisted of two first team All-American selections, two SEC championships and the only two NCAA Outdoor Championships in the pole vault in Ole Miss history.

Kendricks left Ole Miss after his junior year to go professional in pole vault.  He vaults for the Nike club and the United States Army.