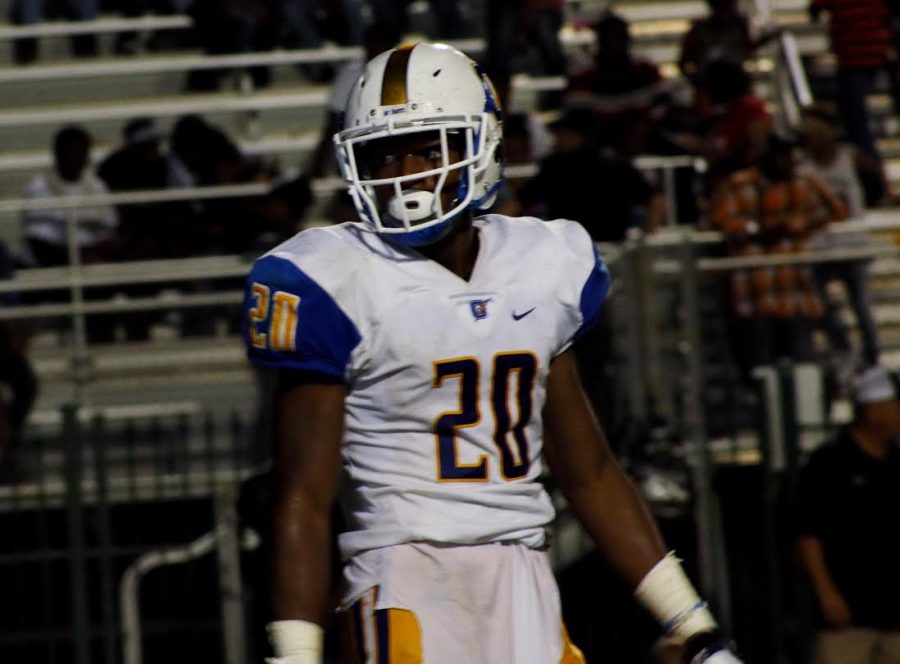 Senior safety D.Q. Thomas gets back into position after a West Point offensive play.

WEST POINT — The two most dominant region 1-5A teams the past seven years met each other right off the bat to start region play. The West Point Green Wave finally broke through a barrier that was unbreakable for three years.

The Green Wave defeated the Oxford Chargers 22-8 in the region 1-5A opener. The win for West Point ended a five game losing streak to the Chargers and their 22 region game winning streak. Even in loss, OHS head coach Chris Cutcliffe thought his team played hard against a team whom many consider to be one of the favorites to win the 5A state title.

“I think you saw a team that competed and played tough and played physical tonight,” Cutcliffe said. “I challenged them that no matter what the scoreboard showed at the end of the game, I wanted people to know what type of football team we were and that we were a physical football team and that we played hard every snap. I think we accomplished that goal, we just came up a little short on the scoreboard and we have got to execute a little bit better.”

It was another offensive struggle for the Chargers, they finished with under 150 yards of total offense. Oxford QB John Reece McClure was constantly pressured by the Green Wave defense and was sacked on many occasions. The ground game was stuffed for most of the night. The Chargers also had two second half turnovers that proved to be costly late in the game.

“Every big play was made by them [West Point], we didn’t make a big play tonight and offensively we didn’t execute consistently enough and we have to get better at that,” Cutcliffe said.

McClure completed 13 of his 24 passes for 86 yards, 44 of those yards were to Damarea Burt who finished with five catches. Hiram Wadlington finished second on the team with four catches and 26 yards receiving.

On the ground, Wadlington finished with 14 carries and 31 yards rushing and a touchdown which drew first blood late in the first quarter.

Other than a few big runs from West Point running back and Mississippi State commit Marcus Murphy, the Chargers played well against the Green Wave for most of the night.

“We showed that we can stop them but they made big plays and they added up on us,” D.Q. Thomas said about his defense

Quentin Wilfawn led the Chargers once again with 10 tackles followed by Jay Frierson with nine tackles, Thomas with eight tackles, and C.J. Terrell with seven tackles. Wilfawn also got an interception in the first quarter.

The Chargers drove to try and extend their lead midway through the third quarter. The Chargers faked a punt to keep that drive alive and got a first down. A few plays later, the Green Wave sacked McClure and forced a fumble. The Green Wave recovered the fumble and Murphy raced 39 yards for a touchdown shortly after the fumble. West Point would not be denied from that point on.

No Oxford player put up big numbers in this game, however, Wilfawn made a big impact early in the game. On the very first drive of the ball game, Wilfawn made a big hit on West Point quarterback Clayton Knight for a sack. A few plays later, Wilfawn intercepted Knight’s tipped pass and put the Charger offense in good field position, the Chargers scored as a result of the turnover.

“As long as we play hard, you shouldn’t be down and it shouldn’t hurt you, as long as you can go home, look in the mirror and say you gave it all you got,” Thomas said.