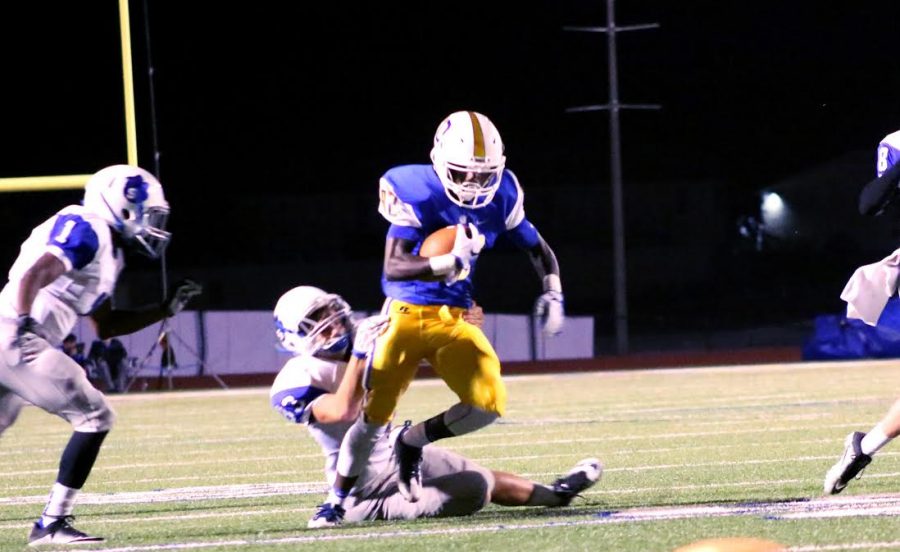 OXFORD — It didn’t take long to make clear who the better team was Friday night.

The Oxford Chargers took care of business defeating the Saltillo Tigers 42-0. This win was head coach Chris Cutcliffe’s first win at Bobby Holcomb Field. The Chargers put together a complete victory all around, eclipsing the 30 point mark for the first time this season and not allowing a single point for the opposition.

“We challenged them to put together a complete game and I think our guys responded in a big way,” Cutcliffe said. “I think we had a great week in practice, on defense especially. I think they prepared really well and it showed tonight and they were consistent.”

“I think we had lost a little bit of our confidence and I hope we got it back now after tonight, after a good performance,” Cutcliffe said. “The key is to keep getting better and keep improving on it every week.”

Quarterback John Reece McClure threw for 256 yards and three touchdowns while completing 15 of his 21 passes.

On the ground, Hiram Wadlington ran for a career high 162 yards on 21 touches. Wadlington also ran for two scores.

At receiver, Barry Flowers caught five passes for 130 yards and getting two touchdowns including a 75 yard touchdown midway through the first quarter of play. Damarea Burt had four catches for 65 yards and a 25 yard touchdown with about a minute left in the first half.

The Charger defense killed two birds with one stone in this valiant effort.

“Our two goals this week were to score on defense and to not allow a touchdown and we did both of them,” defensive coordinator Matt McCrory said. “I’m extremely proud of these kids, they deserved that, they work every day at practice and that means something to them.”

Jay Frierson led the way with 13 tackles while Quentin Wilfawn had 11 tackles, one of those for a sack.

The Chargers would manage to score their first defensive touchdown of the season on a scoop and score by D.Q. Thomas early in the ball game.

The game was Oxford’s to lose almost from the very beginning. The Chargers opened the game the way they had quite frequently last season with an onside kick. The Chargers recovered and Wadlington rushed for a touchdown 36 seconds later. Then 84 seconds later, Thomas caught a bad Saltillo pitch and took it to the house. Oxford had a 14-0 lead with 10 minutes left in the first quarter. Oxford would cruise the rest of the game for a victory.

After rushing for only 31 yards and getting two yards a carry against West Point last week, Wadlington rebounded to get a career high in rushing yards with the 162 that he had in this game. Wadlington averaged eight yards a carry.

“We knew what we were capable of so this week,” Wadlington said. “We had to play with a chip on our shoulder to make a point that we aren’t just bad at all, so we had to come out and make a point on offense and defense and thats what we did tonight.”

-This win was the first home win this season for Oxford