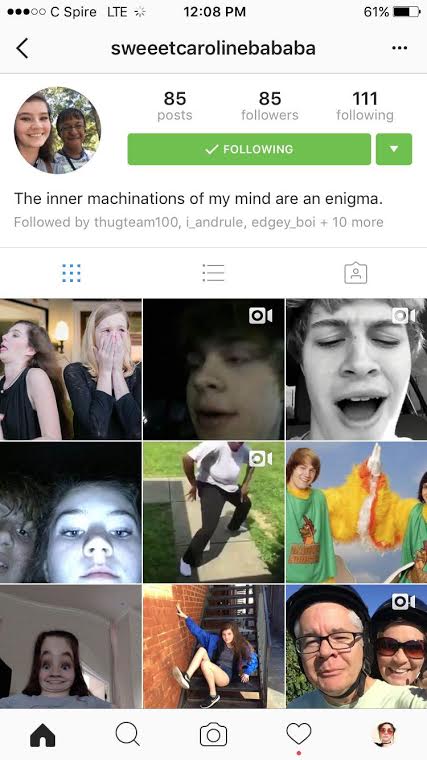 A new trend among students at Oxford High is creating joke accounts on Instagram, or “Finstagram.”

According to safesmartsocial.com, the name “Finstagram,” often shortened to “Finsta,” was created by the combination of the words fake and Instagram. These fake accounts are private joke accounts created to be the opposite of the primed, posed, and prepared nature of regular Instagram accounts. It is intended to be raw and real, and often, very silly. They have increased in popularity as a way to let people express a different side of themselves on social media.

Students feel that with a fake account, they can show a controlled audience a more realistic and humorous view of their lives. With theses accounts, they can be themselves without fear of judgement from others. They are free to post without worrying about how their audience will take it. It’s a no-remorse way to do social media.

“You can post a lot more than a regular account, and it’s usually for your closest friends, so you can post anything you want with worrying about what other people would think,” sophomore Caroline Newsom said.

Most people who have fake accounts encourage their friends to join in. It becomes almost a social media haven for friends who know each other well. The controlled audience often excludes parents and family members, and limits the viewers to only people with whom the poster wishes to share everything.

When asked the purpose of making a fake account, junior Georgia Hogue said, “if you’ve got something to hide that you want to share.”

Students also feel that social media presence that isn’t picture perfect is more accurate in describing who they are.

“I like it because it’s a lot more ‘me’ than my other account,” junior Madison Colston said.

Her view is shared with many other students as well.

“My public Instagram is the best side of me and my private Instagram is random thoughts or funny pictures I want to show a small group of people,” sophomore Jess Edge said.

As “Finsta” accounts increase in popularity, the question of why people aren’t realistic on their regular Instagram accounts is raised.

Fake Instagram accounts have continued to grow in popularity as a way for people to express a different side of themselves on social media in a fun way.