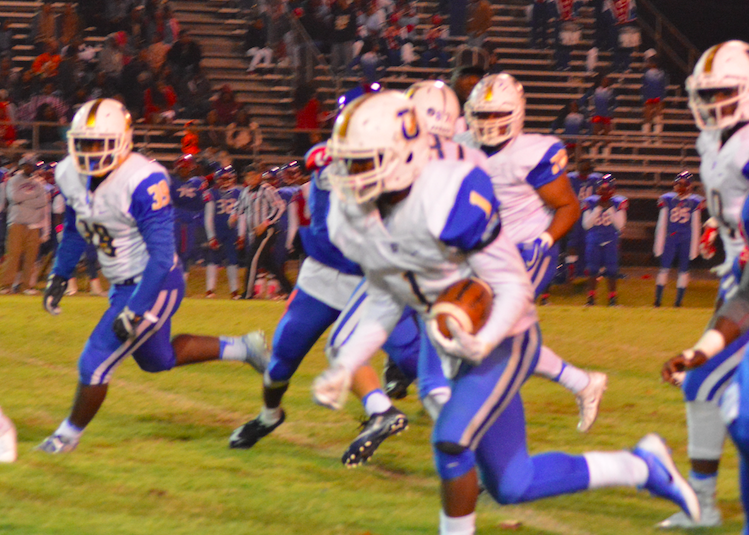 CLARKSDALE — A chilly October atmosphere couldn’t hold down the red hot Oxford Chargers, not in this crucial region 1-5A showdown.

The Chargers won their fourth straight game by defeating the Clarksdale Wildcats 27-13 at Crumpton Field in Clarksdale. With the Oxford win and a 43-21 Lake Cormorant win over Center Hill, the Chargers earn a spot in the playoffs for the fifth straight season.

The Chargers scored 27 points on one of 5A’s top scoring defenses despite four turnovers. Execution was the key against a stout Wildcat defense.

“Offensively, we had a great week of practice,” Cutcliffe said. “I felt like we had a great game plan coming in. Really our players executed at a high level.”

John Reece McClure completed nine of his 13 passes for 186 yards with three touchdowns and two interceptions.

Joe O’keefe had a breakout game, getting two touchdowns on two catches on the night. O’keefe had 49 receiving yards. Jaquan caught a 41 yard touchdown, his first touchdown coming off of a foot injury.

On the ground, Hiram Wadlington carried the ball 27 times for 120 yards and a touchdown midway though the third quarter. Wadlington cracked the 1,000 rushing yard mark in this game.

The Chargers were phenomenal on defense once again. All of Clarksdale’s 13 points were a result from good field position off of a kickoff return by Clarksdale’s James Banks and a Charger fumble on their own end of the field.

“I thought our defense was outstanding. We gave up a short field twice in the first half, we gave up some points,” Cutcliffe said. “We talked to our guys all the time about overcoming adversity. We tried to create those situations in practice and in the offseason as much as we can to teach them how to battle through stuff like that. I thought they did a tremendous job of it.”

The Chargers forced three turnovers. D.Q. Thomas recorded an interception for the fourth straight game. Quay Quarles also got an interception that denied Clarksdale’s final chance to score points in the fourth quarter. C.J. Terrell recovered a Wildcat fumble on Oxford’s one yard line midway through the second quarter.

Things were starting to looking ugly midway through the second quarter. Three straight possessions between the Chargers and Wildcats ended with fumbles. Clarksdale quarterback Terrance Humphrey found his man Ken Furdge on a roll out for a touchdown. Clarksdale’s PAT was blocked, but the Wildcats tied the game 13-13 with 4:10 left until halftime. The Chargers drove to get points before halftime. McClure then threw a deep pass that was intercepted in the end zone by Ken’s little brother Esaias Furdge. Clarksdale drove effortlessly down the field until they reached Oxford’s red zone. The Wildcats decided to go for it on 4th down under a minute left in the half. Humphrey’s throw to Ken Furdge in the end zone was knocked away at the last second by Devin Rockette. The Chargers took over on downs with 36 seconds left in the half. Even though the score was 13-13 at the break, the Chargers had momentum going into the third quarter. Oxford outscored Clarksdale 14-0 in the second half.

O’keefe’s only catch last week was a two point conversion. O’keefe’s only two catches in this game were touchdowns, one to draw first blood in the contest and one to put the game away late in the fourth quarter.

“I’m so proud of him,” receivers coach Logan Dodson said. “He works so hard, he’s such a good kid and he fought injury earlier in the year. He came back and really competed.”

“We needed a playoff mentality to start now,” Cutcliffe said. “I thought our guys responded to that really well.”

Former Oxford defensive line coach Terrance Metcalf, a Clarksdale alum, had his 79 jersey number retired at halftime
The Chargers and Wildcats combined for seven turnovers
Up next for the Chargers is senior night against the Center Hill Mustangs