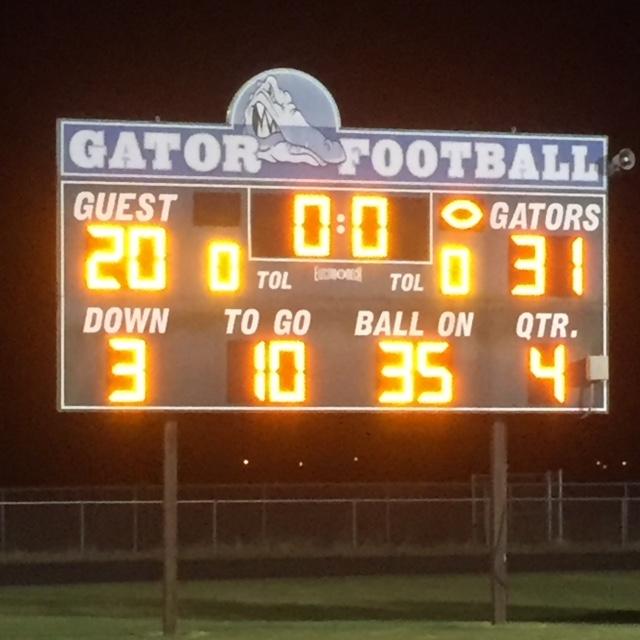 The Gators used a strong second half to defeat the Oxford Chargers 31-20 in the regular season finale. The Gators beat the Chargers for the first time in program history.

An Oxford offense that has been tough to stop, for the most part, in region play was shut down for most of the night.

“Offensively we really didn’t do much at all in the first half,” Cutcliffe said. “We got a little more done in the second half, but have got to play a lot more consistently on offense.”

John Reece McClure completed 19 of 32 passes for 179 yards and threw for a touchdown.

Oxford couldn’t get much going on the ground, averaging two yards a carry as a team. Wadlington had 12 carries for 26 yards.

The Chargers, defensively, were strong for most of the night, forcing four turnovers.

“Defensively, we couldn’t have asked those guys to do a lot more for us,” head coach Chris Cutcliffe said. “They played their hearts out.”

“We did what we had to do,” linebacker Jamar James said.

C.J. Terrell led the Chargers in tackles with 14 tackles. James, Jay Frierson, and Quentin Wilfawn all had 11 tackles each. Wilfawn broke the school record for tackles in a season, a record that was previously held by Will Britt in 2003. Wilfawn now has 160 tackles on the season.

“Quentin has been so consistent and so good. He’s a great young man, a great leader, a great student. He does so many things well. So I’m so proud of him both on the field and off the field,” Cutcliffe said.

Devin Rockette intercepted Lake Cormorant’s Will Guest and took the ball 80 yards the other way for a pick six on the first offensive drive of the ball game. D.Q. Thomas got two interceptions this game, one was taken back for a 60 yard pick six near the beginning of the second quarter.

The Chargers got their first offensive touchdown of the game with a 10 yard fade throw to Webb to take the lead 20-15 early in the third quarter. The Gators were denied on their next two offensive possessions with Thomas’ second interception and a fumble recovered by Terrell. Late in the third quarter, a promising Oxford drive was doomed with penalties. McClure threw a screen pass to Joe O’keefe and O’keefe was hit hard and lost the ball. The Gators recovered the ball in the end zone for a Lake Cormorant touchdown. The two point conversion failed, but the Gators had all the momentum they needed carry them to victory. The score was 21-20 Lake Cormorant after the fumble.

While the Chargers struggled to make plays offensively, their defense made plenty of plays, especially in the first half. Thomas made a few of them for the Chargers, getting two interceptions, a pick six, eight tackles and two pass deflections.

“This is an emotional loss, but we know that the real test is next week. We have got to put on more steam,” James said.

Oxford had 63 yards of total offense in the first half
This loss was the first time since 2011 that Oxford lost a region game when the opponent was not West Point
The Chargers get the No. 3 seed as a result of the loss and will travel to Grenada to open up the 5A playoffs