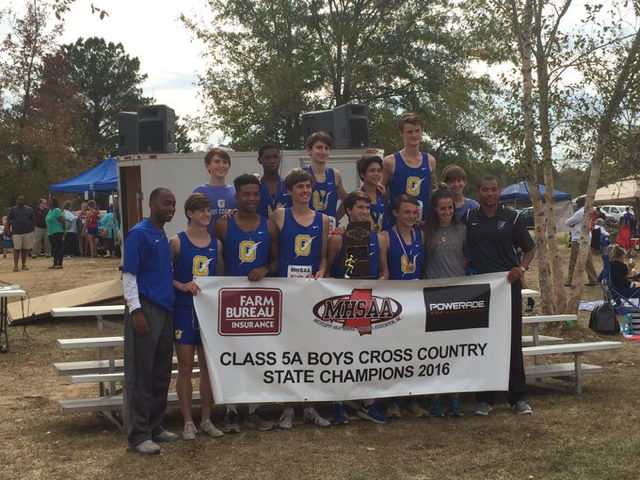 The OHS boys cross country team poses for a picture after winning the MHSAA Class 5A State Championship.

Oxford High School’s boys and girls cross country teams traveled to Clinton to compete for the state title on Saturday, November 5, at Choctaw Trails in Clinton, MS. Both teams had strong seasons with several top 10 and top 15 finishers at nearly every meet.

Leading up to state, the teams practiced twice a day on Tuesdays and Thursdays focusing on speed in the morning and distance in he afternoon. They also ran a lot of hills to build strength. This dedication paid off for the teams.

Senior Kyle Rock, a state champion in the 4×800 meter relay and an All-State 800 meter runner in track, was one of the top finishers for the boys team. Rock finished his cross country career out in style after having been out of the sport for almost three years from severe shin splints.

“I was especially proud of Kyle because he was out of running for two year until last year when he slowly started to run,” Patton said. “He had a good cross country season last year and a very good track season. This year he went into his cross country season very focused and determined to compete at a high level and he did just that.”

Senior Jonathan Tyler was also very proud of his teammate, adding that he is “a great guy for the younger runners to look up to.” Tyler won All-State in the competition and is planning on training hard for indoor track season to  help the track team win another state title in May.

The turning point in the boys meet was after the first mile where Oxford had a pack of five runners running with one Saltillo runner. They found their second wind and went for it. Oxford never looked back. They would leave Clinton with the state title.

“The race was very close at the one mile mark,” said head coach Chris Patton, “but we extended the lead and put ourselves in position to win from the two mile to the finish line.”