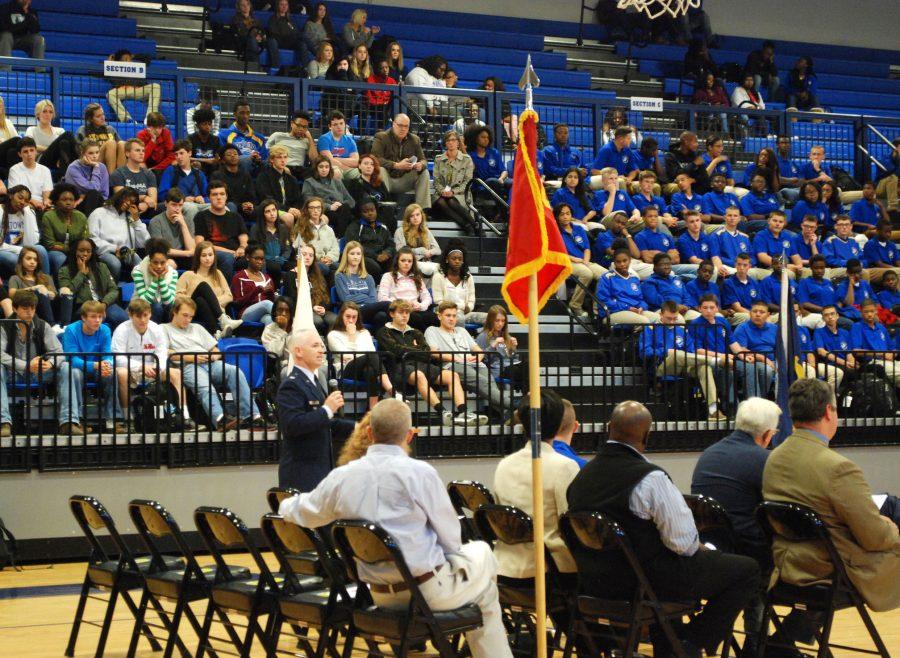 Yesterday, OHS held their annual Veterans Day Memorial Ceremony, an event that the school has organized since 1996.

The beginning of the event included a description of the symbolic table that honored prisoners of war and those who went missing in action.

“Everything there is symbolic,” 1st Sgt. David Leach said. “Each piece has a meaning.”

Following the explanation of the table’s symbolism was the marching on of colors, a reading of the poem “Old Glory,” the national anthem, and then the guest speaker’s introduction and remarks.

This year, the guest speaker for the event was Lt. Col. Mark Sudduth, who stressed the importance of being a proud American citizen.

“You can tell he’s very patriotic about the country, and he’s very proud of his own service, as well,” senior and Company Adjutant Anna Takerer said. “He has an impressive record, too.”

The ceremony ended earlier than was intended due to the conclusion of the flex period, so the band students were unable to perform the service medleys and the ROTC could not properly conclude the ceremony.

“Last year we had each service member stand up when their hymn was played,” senior and Company 1st Sgt. Joel Jordan said. “This year we weren’t able to because the bell rang and students had to go to class.”

Though the ceremony ended early, Leach was satisfied that the students who attended were able to hear Sudduth’s speech, and Leach hopes that those students were able to learn from what they heard.

“I think the guest speaker’s message was really good,” Leach said. “I’m hoping that the students that were there can walk away with some of the things he was discussing and talking about because it is relevant today in their lives, as well.”

The Veterans Day Memorial Ceremony was held yesterday because it was the Marine Corps birthday. However, senior and Commanding Officer Hayden Brines believes that today, on the official Veterans Day holiday, everyone needs to remember the importance of recognizing those who have served.

“I think everyone needs to know about Veteran’s Day, and know the history behind it,” Brines said. “It’s symbolic because it is the people who have served for your nation. You can’t do it all on your own because if this person didn’t sacrifice their time and life for America, we wouldn’t be where we are today.”