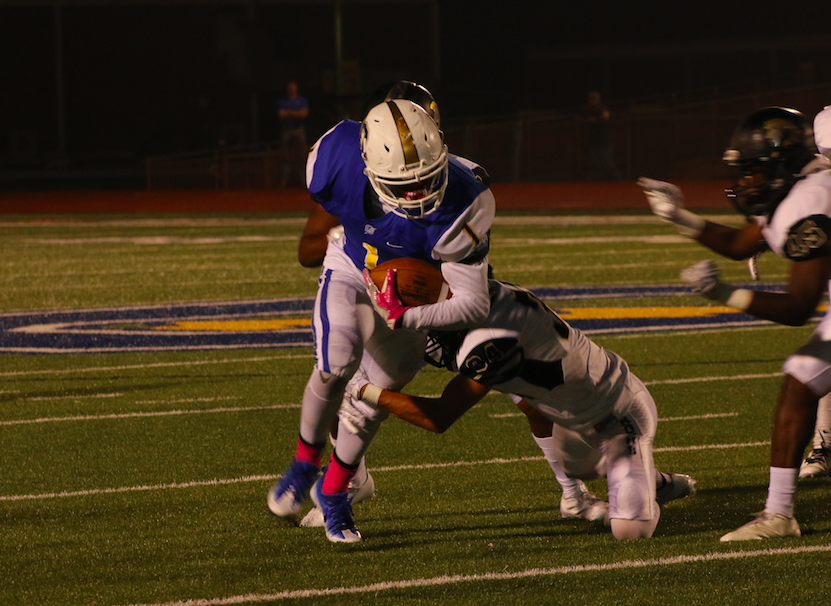 Junior running back Hiram Wadlington tries to elude a tackle from a New Hope defender.

Two 5A heavyweights collide on Friday, November 18 at Bobby Holcomb Field. The No. 3 seed Oxford Chargers are looking to make it back to the North Half Championship game for the fourth straight year, to do that, they will have to knock off the No. 1 seed West Point Green Wave, a physical and athletic team that beat them earlier in the year. The Chargers are coming off of a huge first round win against the No. 2 seed Grenada Chargers 34-16 on the road. In that win, the Chargers ran the ball very effectively against one of 5A’s toughest defenses. Defensively, the Chargers stuffed the ground game of Grenada for the majority of the night. They will need much of the same against the Green Wave.

These two teams last met on September 23 at Hamblin Stadium in West Point to open up region play. The Chargers came into the game winning 22 straight region games while West Point came in as whom many considered to be the favorite to win 5A in the preseason. West Point received the ball to start the game, but wouldn’t get far with Wilfawn catching an interception at midfield. The Chargers capitalized with a touchdown run by Wadlington followed by a two point conversion run by McClure. Quickly, Oxford was up 8-0 on West Point. It didn’t take very long for the Green Wave to respond thanks to a 67 yard touchdown run by Murphy. The PAT made the score 8-7, Oxford still with the lead. The game was a defensive slugfest from that point all the way to late in the third quarter. Oxford tried to extend their lead late in the third quarter, but a fumble stopped them in their tracks, West Point recovered. Just a few plays later, Murphy again ripped off a big touchdown run 35 yards to put the Green Wave out in front. The score was 15-8 West Point with a two point conversion. Oxford drove to tie the game early in the fourth quarter, but another fumble ruined their drive. The fumble was recovered by West Point and taken 50 yards the other way for a scoop and score, putting the game practically out of reach. West Point was victorious, winning 22-8.

Ball security on offense- As mentioned before, recapping the last meeting between these two teams, turnovers were huge in the second half. The Chargers had a 8-7 lead with a little momentum, driving on offense, but when that first fumble happened and when they scored just a few minutes later, West Point had pretty much every bit of momentum. The second Oxford fumble just added to it. Turnovers cause momentum, and Oxford cannot afford to lose momentum in a game like this. For now on, it is win or go home.

Prevent the “home run” defensively- West Point has players with big play capability, breaking loose for numerous 40+, 50+, 60+ yard touchdowns on the year. The last few years when West Point played Oxford, it was no different. If the Chargers can limit big plays and force West Point to drive the ball, the Chargers can adjust and stuff the Green Wave like the Chargers have done plenty of time this season.