Tyler continues to inspire students in his 24th year of teaching 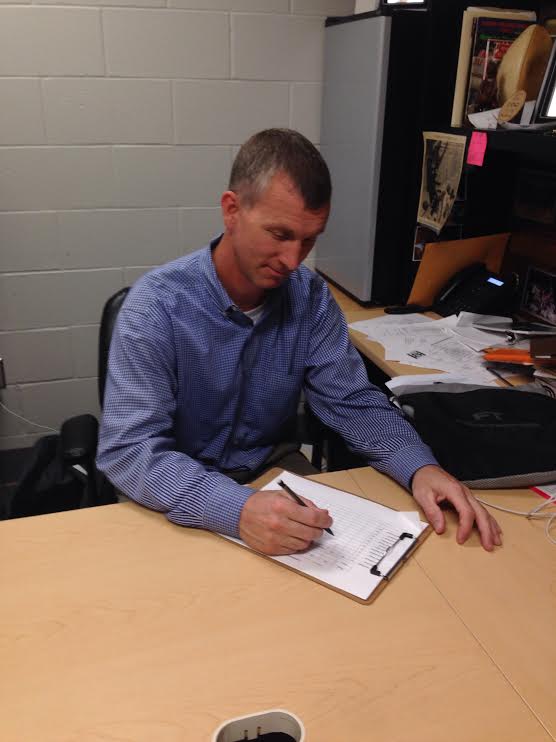 Students often complain that four years in high school is a bit too much to handle. Driver’s education teacher and basketball coach Drew Tyler has been a teacher in the Oxford School District for 24 years, longer than any other teacher at OHS.

“I got into education and just felt like I could use basketball as a tool to help teach life lessons and help teach kids in an academic setting,” Tyler said.

Tyler started teaching at Oxford Middle School in 1993. Four years later he moved to OHS, where he continues to find true connections with his students.

“It helps me get a real measure of who they are and kind of what they’ve got going on in their life,” Tyler said.

Tyler did not realize that he wanted to be a teacher until he reached college. While Tyler started as a business major at the University of Mississippi, he soon realized teaching was where he needed to be.

“I enjoyed being around kids, and I liked the game of basketball,” Tyler said.

Tyler has seen many changes as the school has progressed and moved locations.

“I’ve had 6 principals, and I’ve had 6 superintendents since I’ve been here,” Tyler said. “I’ve seen a lot of transitions with administrators and co-workers as teachers, but we’ve always been one of the best school districts in the South, and I’m proud to be a part of it.”

Tyler takes his driver’s education class very seriously since he teaches students how to drive safely. He knows that he takes on a lot of responsibility, as students will continue to use what he has taught them for the rest of their lives.

“I’m trying to help put a teenager on the road, behind the wheel, eventually by themselves,” Tyler said.

Tyler also enjoys being able to really get to know his students as a coach and as a teacher.

“We’ve got to understand we have students. We don’t have social security numbers. We have students with faces and names, and that’s who we’re trying to help,” Tyler said.

Many of Tyler’s students feel that Tyler succeeds when it comes to being more than just a teacher.

Smith is in one of Tyler’s driver’s education students and feels like she learns and gains a lot from Tyler’s class.

“If you keep messing up, he’s not going to get mad at you, but he’ll just encourage you to do better,”  Smith said.

Senior basketball player Jarkel Joiner agrees that Tyler is a great teacher and finds that Tyler truly connects with his players over more than just basketball by taking them out to eat, going bowling with them and giving them support when they need it most.

“He’ll help us with anything we need help with. We can call him no matter what time in the morning because he says he never sleeps. He’ll just help you out with everything,” Joiner said.

Joiner sees Tyler as not only an amazing coach, but also as a mentor and role model.

“We’re like a little family,” Joiner said. “He’s like our dad away from our mom and dad at home.”