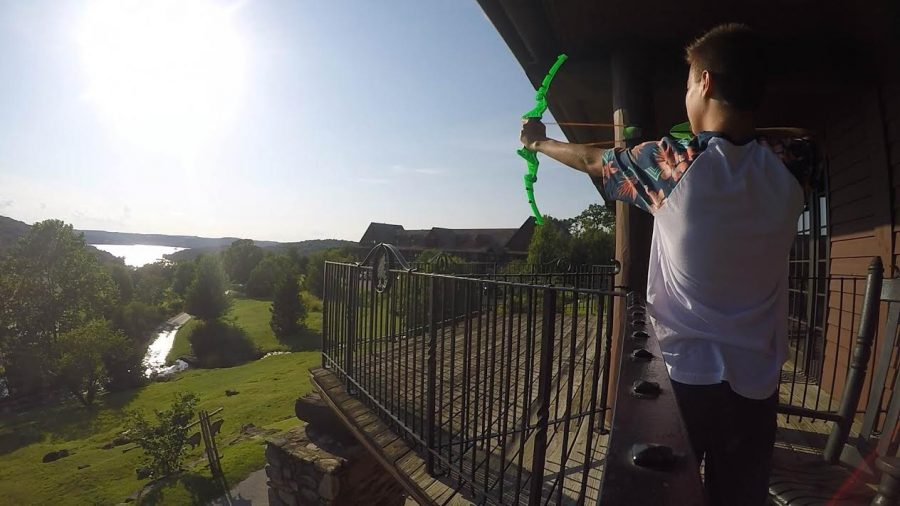 In 2015, junior Trent Collier took a job with a company called Zing Toys.  He is one of about 15 other people, known as the Zingshot Team, who make promotional videos for the company.

Each month, Zing Toys sends Collier their newest models of toys, specifically toy bows and crossbows. Collier then takes videos of himself doing “trick shots,” such as shooting arrows into a basketball goal or at a target.

Collier initially became interested in joining the Zingshot Team because of his prior experience doing trick shots. In the summer 2013, he and sophomore Eli Hartnett began making videos of themselves doing frisbee trick shots.

“He saw some people on Instagram doing it,” Hartnett said. “That was one of the things we did to pass time in summer when we got bored. We would throw a frisbee into a basketball goal or trashcan or hit a target or something like that.”

After doing frisbee trick shots for about a year, Collier decided that he wanted to try something new.

“That’s when the Zing thing came in,” he said.

Collier heard from a friend that Zing Toys was looking for people to make promotional videos, so he contacted the company and told them that he was interested in making trick shot videos.  They looked at the frisbee trick shots on his Instagram account and YouTube channel and eventually chose him to be one of the first members of the Zingshot team.

“I was one of the starting members of the team that they started out with,” Collier said. “They’re getting bigger and bigger now.”

Collier was originally interested in Zing Toys trick shots to try something new that was different from frisbee trick shots, but now he does it as a paid job. He gets paid each month if he makes 20 successful trick shots.

“You’re not going to make a shot on the first try every time,” Collier said. “Sometimes if it’s a difficult shot, it takes a while. Sometimes you end up never even making it.”

After filming himself making the shots, Collier edits the shots in iMovie and puts music to them. Then, he sends the videos to Zing Toys, and they put them on YouTube or Instagram.  Collier has seen videos of himself on the Zing Toys Instagram account.

“One of my friends sent a direct message of me in one of the ads on Instagram. He was like ‘Wait is that you?’ I was like ‘yeah,’” he said.

In September, Collier participated in a trick shot contest with Zing Toys. He was competing against people around the world who had Zing Toys bows and he won first place and $1,000.

“It’s honestly a lot of work, but if you get it done and get the money, it’s a good feeling,” Collier said.