Oxford neighborhood closing may lead to relocation for OSD students 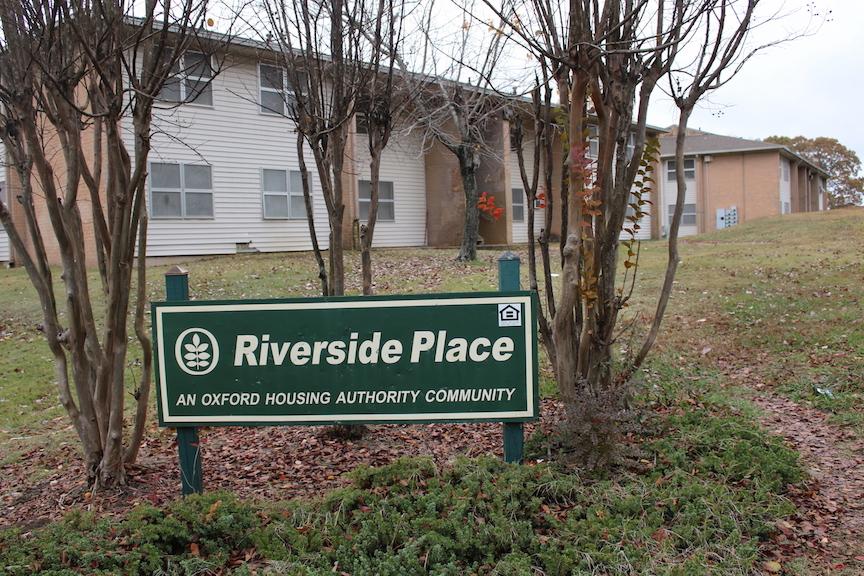 The Riverside Place sign stands in front of one of many apartment buildings of the neighborhood. The public housing complex will close in February.

The closing of Riverside Place, one of Oxford’s only section 8 public housing complexes and home to several Oxford School District students, may lead to students being relocated from Oxford. Section 8 housing provides subsidized apartment complexes for low-income families, the elderly, and the disabled.

In February, Riverside Place will be closed and replaced with Housing Choice Vouchers. “The Housing Choice Voucher commonly known as ‘Section 8’ is a federally funded program that provides rental assistance for standard quality units chosen by the tenant in the private rental market,” said Teasha Sanders, head of Public Housing and Occupancy for the Oxford Housing Authority.

“Riverside Place was built in the late 1960s and doesn’t have basic amenities such as washer/ dryer hook-ups, central A/C, and there isn’t a laundry facility on-site,” Sanders said. “We also have plumbing and electrical issues due to the age of the buildings. Our goal is to ultimately provide the current Riverside residents with better living conditions.”

Residents were first notified of Riverside’s closing on Feb. 6, 2016. Since then, Sanders and the Oxford Housing Authority have been attempting to find landlords in Oxford that will accept the U.S. Department of Housing and Urban Development (HUD) vouchers.

However, finding landlords who will accept them has been difficult. Sanders and the Oxford Housing Authority have only been able to find around 17 landlords willing to accept the vouchers and about 40 potential units for residents. There are currently 91 families living in Riverside.

“I think most (landlords) don’t think that the HUD voucher provides enough money,” Alderman Robyn Tannehill said in a recent Board of Aldermen meeting. “That is the perception of the voucher, but it isn’t true.”

A large reason why the HUD voucher is seen as more beneficial is because it allows for residents to live wherever they choose in the US.

“The major difference in the two programs is the funding they receive now is attached to the unit at Riverside Place,” Sanders said. “The Housing Choice Voucher attaches the assistance to the family which gives them the option to stay in Oxford or relocate anywhere in the United States.”

However, this may soon create a problem for those residents of Riverside who want to stay in Oxford. The ability of these residents to find affordable housing in Oxford is very limited.

“Right now subsidized type housing of any nature or any housing designed for moderate income people, you are looking at the unincorporated [outside of Oxford City and Oxford School District limits] areas of Lafayette County,” owner of Bridge Properties, Mike Bridge said in a recent Board of Aldermen meeting.

According to Fred Laurenzo, Chief Administrative Officer of LOU-Home, the lack of affordable housing in Oxford will only continue to be an issue.

“The Vision 2037 Comprehensive Plan adopted by the city government predicts in the next five years a shortfall (deficit) of 400 affordable rental units and 200 single family homes,” Laurenzo said.

Laurenzo also believes that the closing of Riverside may even further increase the prices on more affordable housing options.

“The closing of Riverside would tend to push prices up since you have 91 additional families competing for apartments in the market at the lower end,” Laurenzo said.

For students who will not be able to stay in Oxford when they are evicted in February, such as sophomore Dorian Webb, the closing of Riverside will force them to leave their school half-way through the second semester.

“We’re probably going to Tupelo, when Riverside closes in February,” Webb said. “I don’t want to leave. Oxford has always been my home, but I can’t pay for a house here.”

Before being forced to move from Riverside, Webb was already previously evicted from a trailer park.

“I used to stay in a trailer park and the guy that owned it sold it to Dick’s Sporting Goods Company,” Webb said. “Then I moved to Riverside, and now that’s closing down.”

Oxford School District Superintendent, Brian Harvey, and Sanders both said that they did not know the number of OSD students that currently live in Riverside. Sanders did say, however, that the month selected about when Riverside would close was not something she or the Oxford Housing Authority could control.

“The contract renews every February 28th, so the timing was not anything that we could regulate,” Sanders said.

When asked via email if Harvey had been communicating with members from the city to discuss the closing of Riverside and its effects on OSD students, Harvey responded with the statement, “We will certainly work with students during this difficult time.”

Sanders expects that the Riverside residents will be able to receive their vouchers come January 2017. She also stated that Riverside would not officially close until every family had been relocated.

Laurenzo says that he knows that the majority of Riverside families do not want to move out of Oxford, but that if those unable to find housing in the city limits relocate, it will affect the diversity of both the city and the Oxford School District.

“The children and families who live in Riverside are predominantly African-American,” Laurenzo said. “To the extent that they move out of Oxford or the school district the number of minority students would decline.”