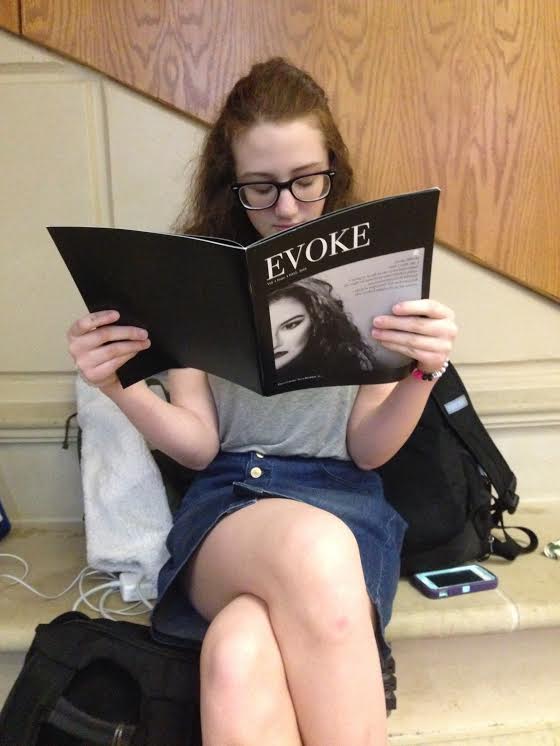 “We decided to capitalize on emotion and allow students a voice, especially since they could not vote,” Evoke advisor Ebony Johnson said.

The magazine was created to allow students speak their mind through written word and artwork. The staff hopes that through self expression, all students can be heard.

“The purpose of Evoke magazine is to provide a platform for student voices without ridicule,” Johnson said.

The magazine’s original theme, The New Age, highlighted the changing times, but the editors of the Evoke believed that a Dear America theme might be more fitting today. Junior and co-editor of the magazine, Neely Mullen, sees the political climate of our school as something everyone wants to talk about, and now, they have a chance.

“We’ve all noticed that everybody in school feels one way or another about the election,” Mullen said. “We weren’t getting that many submissions on our other theme, so we decided to try something that would get a bigger response from people because everybody has an opinion on this.”

Mullen hopes to incorporate pieces in the magazine that capture the many different views of OHS.

“We just kind of want a little bit of everything so that we can have a really representative picture of what our school thinks about this election,” Mullen said.

The other two editors, juniors Calendula Cheng and Anna Renfroe, have similar ideas for the magazine.

“I hope that we create a really diverse magazine with a lot of different opinions and just kind of something that represents the students that they would be proud to have,” Renfroe said.

Sophomore Claire Pearson submitted her opinion to Evoke in the form of a letter.

“I just focused on how great America already is because of our freedom,” Pearson said.

Pearson sees the magazine’s theme as a chance for students to express what is really on their mind.

“It benefits students because it gives them something where they can have an outlet to express themselves and write whatever they feel and not be judged by the student body,” Pearson said.

Although submissions for the magazine were due Friday, December 2nd, the magazine is far from done. The next step for the editors is to sort through all of the stories, poems, letters, and artwork they received, putting into the magazine what they feel works the best. The editors hope to find a diverse range of responses that truly represent the students’ varied opinions.

“I don’t think it necessarily has to be the most amazing poem or essay that you’ve written,” Renfroe said. “Just something that is done well but also just represents your opinion.”

No matter the end result of the magazine, Johnson believes that Evoke will continue to remind students of the power of freedom of expression.

“Our hope for this magazine is to allow students to speak freely and honestly,” Johnson said, “but more importantly, realize that at the bleeding heart of us all, we are one nation. Whoever runs this country should not dictate how you, a person, should feel or what they should believe in.”

The next edition of Evoke is set to come out in the spring of 2017.