Ten albums of 2016 outshine the rest 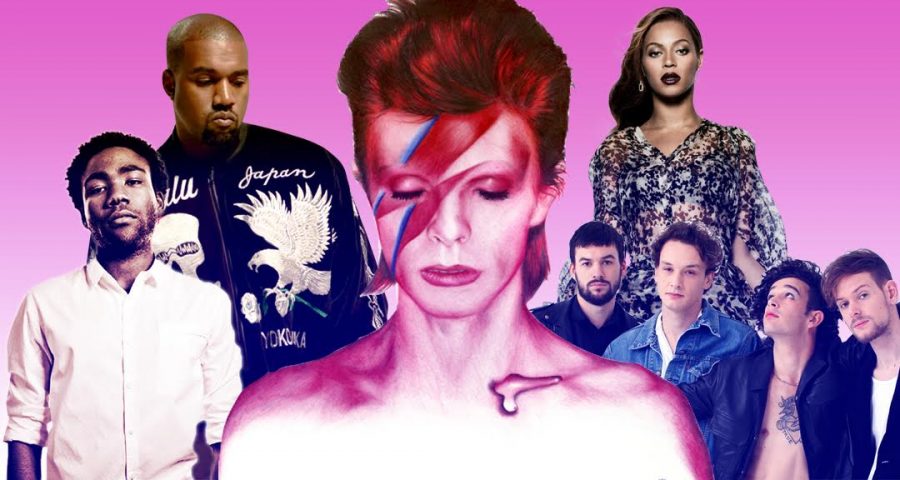 The year of 2016 has been one to remember. A hectic one at that, with the election, deaths of many icons such as David Bowie and Prince, and political protests left and right. Music, however, has delivered kindly in return for the hardships of this year and unified listeners through the entirety of it all. As a handful of astounding albums were released this year, it seemed right to pick a few out of the selection to name my top 10 of 2016. While it was a strenuous and tough group to choose from, the following 10 albums achieved a place for various reasons: lyrically beautiful, production, emotions and bravery of artists.

Starting with a soundtrack to one of the biggest hits in television this year, this up-and-coming duo has begun to steal the spotlight in the alternative scene. Created as a side project by members of Austin, Texas band S U R V I V E, it has turned into a rapid success, receiving much praise. It fueled the first season of the new fan-favorite Netflix series, “Stranger Things,” a dramatic mystery set in the 1980s. The experimental and synth-heavy beats of this album lead the tension-heavy show well and draw viewers in. This also resulted in an eccentric and well-produced album, leaving an impact on both the show and listeners.

Beyoncé pushed the boundaries of genre when it came to her sixth release under Columbia Records. It incorporated pop, hip hop, rock, gospel, reggae, funk and a handful more, all combined in a 12-song project. With guests such as Kendrick Lamar on an emotional hip hop song, “Freedom,” Jack White on a heavy jam session and anger driven “Don’t Hurt Yourself,” and James Blake on “Forward,” the variety and effort put into this album is a jaw dropper. Beyoncé presented many facets of emotions and talents with this release. It is possibly her best production yet.

As the debut album of an up-and-coming trio out of Brooklyn, this gives a promising hope for the success of Wet. Released under Columbia Records, this album is a tranquil and synth-heavy compilation supported with the beautiful vocals of singer Kelly Zutrau. Backed by Joe Valle and Marty Sulkow, this trio has taken a faithful leap into the music industry and has rapidly gained fans after supporting pop band The 1975 on their US summer tour this year.

With very secretive and cryptic social media advertisements for this album, the hype escalated while leading up to the release of British pop band The 1975’s sophomore release in February. The advertisements, however, worked wonders. Topping charts in both the United States and United Kingdom, this album was the band’s first number one on the US Billboard 200 and sold almost 100,000 albums in its first week following its release. Contrasting their first album heavily, this album was less rock, more pop. It worked, though. It flowed through instrumentals such as the title track, and pop ballads such as “A Change of Heart” and “Paris,” and finished out with a smooth acoustic song, “She Lays Down.” It is both lyrically and musically beautiful.

When Kanye West is on his seventh release, it can be well assured that he is most likely going to keep the trend of original artistry and a pleasing rap and R&B album. And that trend did continue. Originally released only through streaming service Tidal, the hype was built for the album’s public release. Once released (might I add it was released primarily through streaming services), the excitement and satisfaction resulted out of a very successful and well-produced album. While some critics complained it was very untidy and not incomplete, this album is possibly one of the best, if not the best, rap and hip hop album of the year. The fact that it is so untidy represents the imperfections in everything, and this album is so (almost) imperfectly perfect. So many ideas and emotions went into this album, and it was evident while listening. The effort put into this album by West and so many other artists, such as Chance the Rapper and Rhianna, payed off. Debuting at number one on the Billboard 200, “The Life of Pablo” was his first album to reach this achievement with only the aid of streaming services and no physical purchases.

With “Teens of Denial” being the thirteenth release of Car Seat Headrest since their start in 2010, the amount of practice this band has put in is undeniable. An extremely emotional ride, listeners go from exciting rock-heavy songs such as the popular hit “Fill in the Blank” to emotional 12-minute ballads talking about the endeavors of life in “The Ballad of the Costa Concordia.” Finally releasing much of the praise deserved with many big publishers, Car Seat Headrest’s hard work of emotions poured into music shows the growth as musicians of members Will Toledo, Ethan Ives and Andrew Katz.

4. “Coloring Book” by Chance the Rapper

Before this year, popular rap never really interested me. However, with the release of Chance the Rapper’s mixtape, “Coloring Book,” my entire perception was altered. The way he coincides lyrics along with beats and rhythms on this album is impressing, and each song is a story on its own. Incorporating gospel and hip-hop into this album, the production was widely praised. With guests including Kanye West, Francis and the Lights, Young Thug and the Chicago Children’s Choir, Chance the Rapper brought in artists from multiple genres to form a versatile and original rap album.

With Bon Iver’s last release a whopping five years ago, the anticipation was unbeatable for his third album, “22, A Million”. Transitioning away from the typical folk music of his first two albums, Bon Iver had more of an electronic sound on this release, with Kanye West as a leading inspiration. The inspiration of West was noticeable while listening to most tracks, with the alterations of Bon Iver’s voice on most tracks sounding very similar to a Kanye West production. Bon Iver did, however, put a very personal spin on this album and kept to his aesthetic. While it began with very electronic folk songs, it soon formed into a very poignant album with sentiment traveling through the lyrics and sound of the entirety of it all. A very well-produced album, it delivered well through the alternative, folk, and pop scenes.

The twenty-fifth album by whom most avid listeners consider an icon, “Blackstar” was the final album by David Bowie, serving as a good-bye. Released on Bowie’s birthday, Jan. 8, Bowie died of cancer just two days following its release. While it was a difficult listen following his death, the album was an apparent goodbye for fans. The response was amazing, with “Blackstar” becoming his only album to reach number one on the US Billboard 200. Throughout Bowie’s artistry, he ventured through many personas and many genres, and finished with an experimental sound with a very dark and solemn note. The genius artistry behind this album and this man will live on forever through this album and his many others, and this album is just another of many representations of the bravery and creativity of Bowie.

1. “Awaken, My Love!” by Childish Gambino

Leading up to the release of Childish Gambino’s third release, Gambino was quoted in many interviews explaining that this album would be different from the past two. And oh, was it different. Rather than it following a strictly rap genre throughout, he ventured into genres that were completely unexpected. Soul, funk, rock, R&B and rap were all performed throughout. With an intense vibe of the 1970s, this album was a delightful surprise. It reminded me of some of the most iconic musicians such as Jimi Hendrix in “Riot,” Sly and the Family Stone in “Have Some Love” with a heavily funk and soul party song and Janis Joplin in a bluesy and soul rock ballad, “Baby Boy.” “Awaken, My Love!” traveled through so many decades and represented so many phases of the music industry. Despite receiving many mixed reviews by fans on social media, the album still proved successful, debuting at number five on the US Billboard 200, resulting in the Gambino’s highest peak for an album on charts.