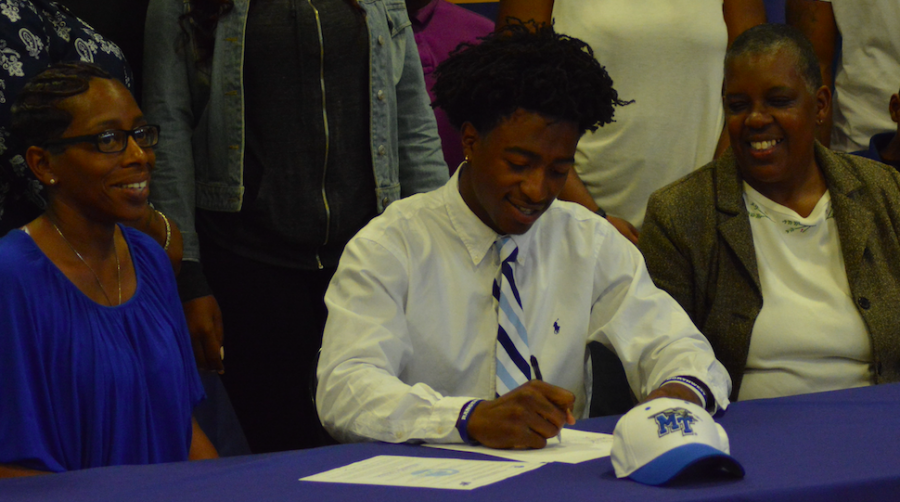 Senior D.Q. Thomas signs his National Letter of Intent to play football for MTSU next season.

On February 1, nine OHS football players signed their National Letter of Intent to go play football for their respective colleges. This is the most football players to sign in one year in the school’s history.

“I’m very proud of these guys and the entire class, even the ones that aren’t moving on to play college football, played a big part in the success of these nine,” Cutcliffe said about his senior class. “Most of all, I’m proud of what they stand for off the field and in the classroom and the type of young men they are in addition to their success on the field.”

Indeed, the Chargers have good accomplishments on their résumé: A 33-10 combined record, seven playoff wins, and three North State championships.

Six of the nine players will continue their football careers at junior colleges.

“Our Mississippi JUCO league is the best in the country,” Cutcliffe said. “The talent level out there is outstanding and those guys are going to play with and against great football players every week. So its a really big challenge, but they also know because of that level of competition, if you can be successful there, you’re going to have a great opportunity to be on that when your time there is up.”

Three players along the defensive line signed with junior colleges.

Two members of the Chargers’ offensive line will sign JUCO also. Center Colton Skidmore and left tackle Ashton Stewart with continue to play alongside each other at Northwest Mississippi Community College. Skidmore started every single game since his freshman year, 59 games. Stewart has started for the last two seasons, he played offensive guard during his junior season before moving to left tackle his senior year because of a key vacancy in that area of the field. Both of them will be coached again by their former offensive coordinator Stan Hill, son of former Oxford head coach Johnny Hill.

“I went a couple of times down there and visited with all the coaches an everyone,” Leary said. “I love all the guys down there and it just seemed like the right fit compared to the other places I looked at.”

Defensive back Devin Rockette made it official, signing with the University of South Alabama after an official visit last weekend.

“I just felt more comfortable there,” Rockette said. “They (SA coaches) really spoke to me about playing as a freshman, that was another factor.

In only his second season playing defensive back last season, Rockette finished his career (as a defensive back) with 99 total tackles, and three interceptions