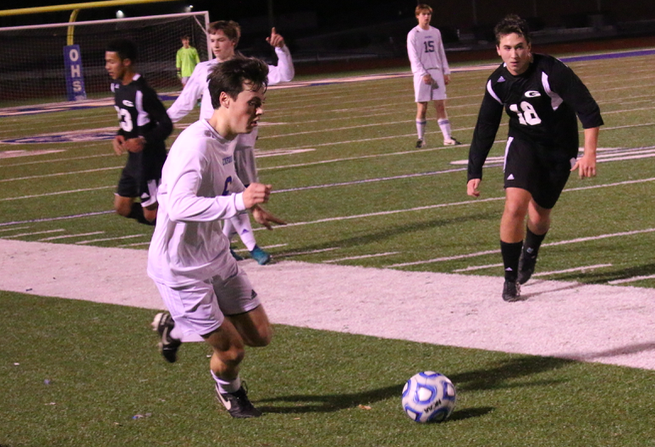 OXFORD — A strong defensive effort proved to be the key for Oxford not once, but twice.

On the same day, the Oxford Chargers and Lady Charger soccer teams hosted the Germantown Mavericks in the MHSAA 5A North State Final. On that same day, the home team was victorious.

The undefeated Lady Chargers (18-0) used a strong start and a strong finish to cruise past the Lady Mavericks 6-1.

“We knew this was going to be a good game,” girls soccer head coach Hunter Crane said. “We knew they [Germantown] were going to come out and challenge us, they did, and it was a fight for 80 minutes. We have a big rivalry with Germantown, so we knew they were going to give us a fight the whole time.”

Oxford scored their first two goals within the first twelve minutes of the game. Morgan O’Connor drew first blood with a goal on an assist from Grace Ann Joyce. Five minutes later, O’Connor struck again, scoring on a penalty pick to put the Lady Chargers up 2-0 early in the contest.

Germantown responded to the early deficit with a goal from Abby Lewis shortly after the penalty kick goal to cut the lead to 2-1. The first half was a defensive stalemate from that point on. The Lady Mavericks controlled the ball often and missed some big goal opportunities, including one shot bouncing off the crossbar on Oxford’s goal. At the half, the Lady Chargers held a 2-1 advantage.

At the beginning of the second half, the story was the same as the last 20 minutes of the first half. Both teams couldn’t get the ball near the goal. Then the door was kicked open, thanks to a goal from Grace Ann Joyce off of a goalie deflection to extend the Lady Charger lead 3-1. Later on, O’Connor put in two more goals and Ally Shinall put in a goal to put the game far out of the Maverick’s reach.

The Lady Chargers will play Saturday for a second consecutive state championship at Madison Central High School. They will face off against the West Harrison Lady Hurricanes once again. Oxford defeated the ‘Canes 2-1 in last year’s title game 2-1.

The boys team looked to make the title game also, following the girls game. They punched their ticket as well with a 3-1 victory.

A fast start was also used by the boys team, they quickly jumped out to a 2-0 lead following a own goal committed by the Mavericks and a Preston Huggins goal assisted by Keaton Cahoon.

“When we score early, our offense steps up. It takes the pressure off of them,” boys soccer head coach Charles Sabatier said.

Eight minutes later, the Mavericks got a goal from Cody Dinklelacker to make the score 2-1. The Mavericks threatened a few times late in the first half, but the score remained 2-1 going into the break.

The Chargers pulled away from the Mavericks with another goal from Huggins. The Charger defense did enough to secure a 3-1 victory.

“We wanted it more,” senior forward Cole Calhoon said. “I did play a little nervous because there was so much on the line especially against Germantown. We did what we were supposed to do, we completed passes, and we finished.”

The boys team will play Saturday for their first state championship for the first time since 2012 following the conclusion of the girls game. They will square off against the West Jones Mustangs.