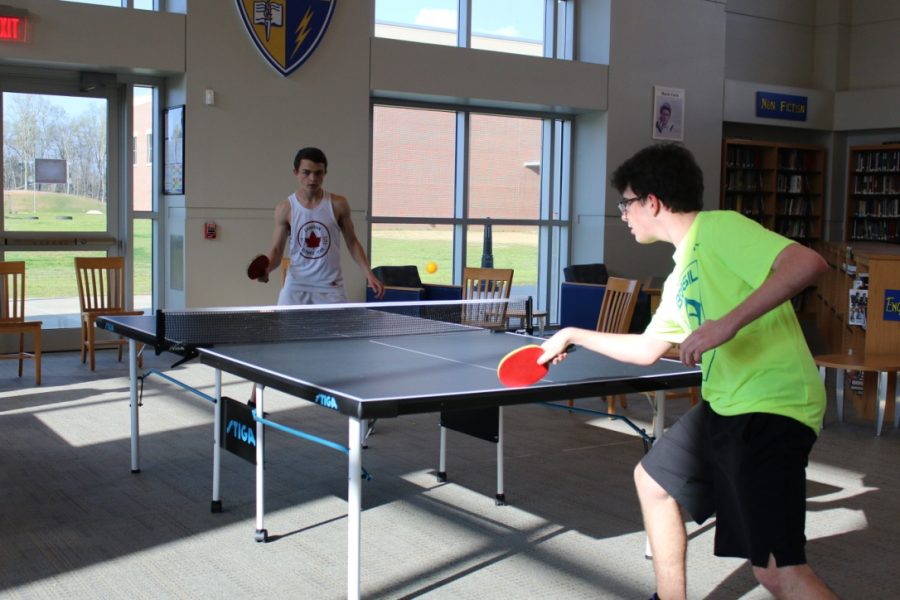 Senior Kyle Rock (left) and junior Bennett Brown (right) compete in the final round of the table tennis tournament held on March 28 to determine who would be the first place winner.

The table tennis club hosted a free tournament open to all students after school in the library on Tuesday, March 28. Around 20 competitors participated in the event, facing off for over an hour for the title of champion.

“We’ve done a tournament in the past, but it was mostly with people in the club,” junior and table tennis club co-leader Bennett Brown said. “We wanted to do it with everyone, which is why we made an announcement to the school.”

Through money made from the homecoming fair and other events, the team was able to create a prize of $50 that was divided up for those who came in the top five spots.

“Over time we didn’t know how to spend the money, so we put a prize pool together with it,” Brown said.

Students who were interested were able to sign up on a Google Form posted on Schoology with their experience level so the club could pair up competitors at the tournament for the first few rounds.

“On the Google Doc, you either said you were a pro, amateur, or newbie,” senior and tournament participant Chris Miller said.

Junior and club member Josh Pearson helped in organizing the tournament by guiding who and where the students would be playing in the library. Pearson also used “up-downs” to determine who would place or be eliminated.

“If you hadn’t lost any you were up, if you lost one you were down,” Pearson said. “If you lost twice you were out. It was double elimination.”

Though Brown won the most money out of the prize pool since he received first place, he plans to give the money back to the club.

“It’s not necessarily about winning, but more about seeing my teammates play and seeing how they’ve progressed throughout the year,” Brown said.

The team is looking at hosting more tournaments next year, and even moving to the gym so they are able to have more room and get more people involved.

“I think some more people should come to it next year, and I was thinking about making it an elective class to make it an actual organized team sport,” Brown said.

For those who were not able to make it to the tournament but are interested in playing ping pong, the club meets on Tuesdays after school in the science hallway.

“It’s a fun experience,” Miller said. “It’s a way to meet new people who have interests the same as you.”