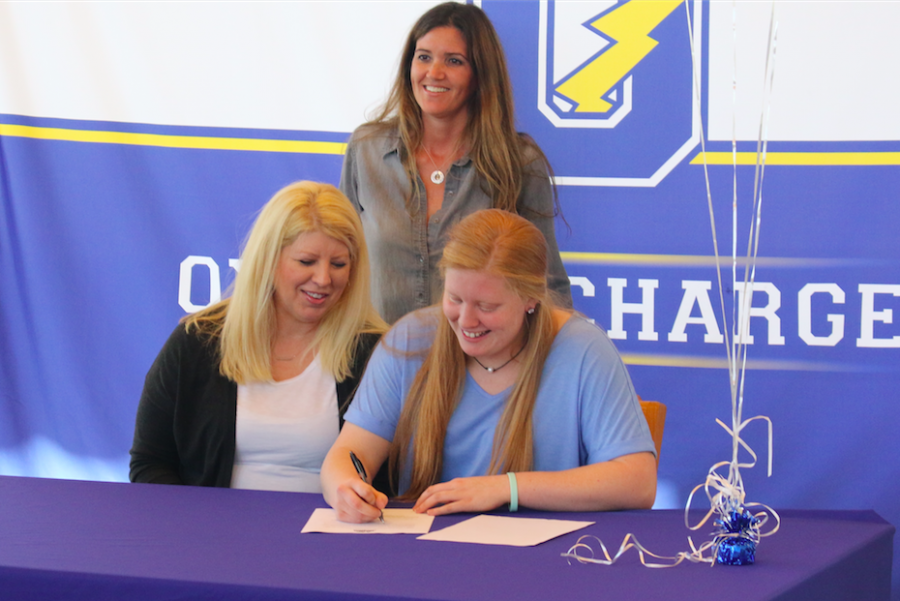 Senior Maggee Hobson signs her national letter of intent. She was one of two student athletes to sign that day.

Two state champions and team leaders made it official on April 4 and signed with their future college teams.

The head coach of the Bulldogs made a big difference in her decision.

Hobson’s signing was the icing on the cake to an outstanding career at OHS. As a senior, Hobson competed in the Mississippi North/South All-Star game last July before taking the court with her teammates in a season that ended up being the best in the school’s history. Hobson, in her senior season, Hobson had 278 kills and a .342 hitting percentage en route to a second school state championship at season’s end.

“For my senior season, I couldn’t have asked for more,” Hobson said.

Her leadership and toughness throughout her high school career has left an impact on the court according to 11th year head coach Tara Ross.

“She [Hobson] just brings mental toughness just love for the game, a true love for the game. She brings that to her teammates. She pushes them and pushes herself. She has everything she needs to be a great leader,” Ross said. “She’s such a dynamic hitter for high school.”

“I liked the feel a bit more,” Calhoon said about choosing MC.

MC head coach Kevin Johns got to see first hand how excellent of a soccer player Calhoon was when he traveled just down the road, to Madison, to see Calhoon and his Charger teammates hoist a gold ball by defeating West Jones 3-0 in the 5A state title game. Calhoon was able to score a goal in that game.

“He actually watched me in the state championship game and asked me after to come and practice with the team. After that, they gave me an offer,” Calhoon said.

First year head coach Charles Sabatier believes that MC is getting a good one with Calhoon soon to join the team.

They are getting a good fundamentally sound player. He is the type of player that leads by example. They are getting a solid, outstanding athlete, and a great guy,” Sabatier said. “His leadership is definitely something that made this season what it was.”