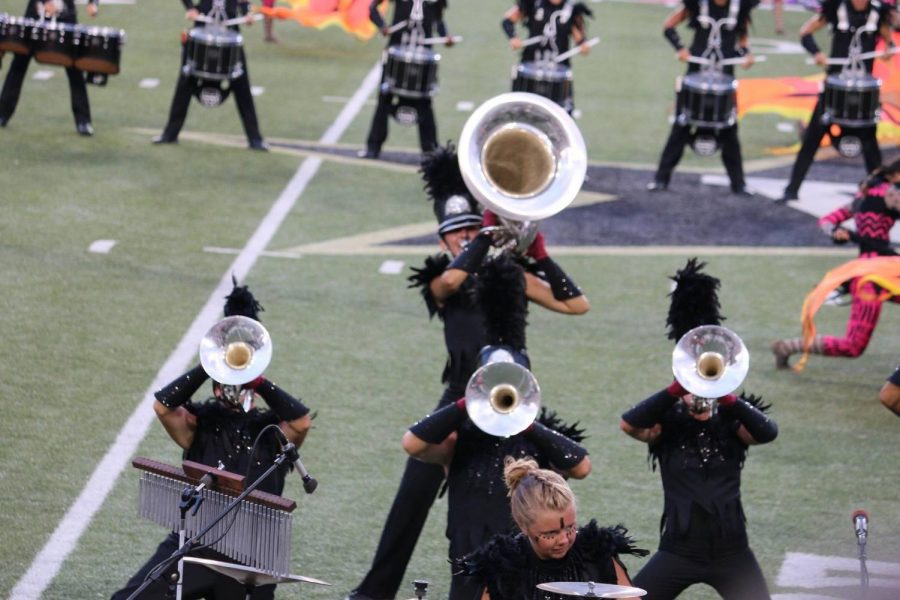 “It’s a large activity that happens over the summer where we audition in December, and we’re offered a contract by the corps if we make it, and you pay thousands of dollars and you are with them the entire summer,” Tidwell said. “There’s a three week period where we work on our show. It’s kind of like marching band but just at a higher level. Eventually, we go on tour where we compete against a bunch of different drum corps throughout the country, and we just do that for the rest of the summer.”

The marching band started their training in Nashville, Tenn., then traveled to 15 different states and competed in around 20 competitions performing their “Tribe” themed show. Tidwell, the OHS drum major, plays the tuba, and Torrent plays the mellophone in the band.

“The kind of meaning to us was just how we work together as a family and how we go far,” Torrent said. “The [slogan] was ‘If you want to go fast, go alone. If you want to go far, go with a tribe.’ It had a lot of tribal references. There were spirit sticks. We played a bunch of tribal-like music.”

Drum corps members worked for three weeks, 14 hours a day. According to Tidwell, each drum corp member is responsible for having music memorized as well as keeping in shape.

“They will load onto a charter bus, drive to a new state, practice all day, compete each night, get back on the bus, and drive to a new state to do it all over again,” Band Director Jessica Roebuck said. “When the summer is almost over, corps meet up for Drum Corps International Championships.”

According to Torrent and Tidwell, they found their friends through band. They have support and encouragement from friends, family, and their band directors Jessica and Daniel Roebuck and Mel Morse.

“My parents have been very supportive. They would give me lessons if I had time for it,” Torrent said. “I have other friends who come and see me at some shows, at some competitions. I have friends in other bands who I get to meet either at football games or at band competitions. It’s encouraging.”

According to sophomore and drummer Carter Crouch, Tidwell and Torrent do well in band.

“They’re both really good players,” Crouch said. “They’re probably the best players that we have on the horn line.”

After graduating, the band members hope to continue band in their future careers. Tidwell plans to be a professional tubist while Torrent hopes to be a conductor.

“Charlie and Vasilios are both wonderful players,” Jessica Roebuck said. “They are both very dedicated, hard workers. They always have what is necessary for rehearsal, and they always come with a good attitude.”