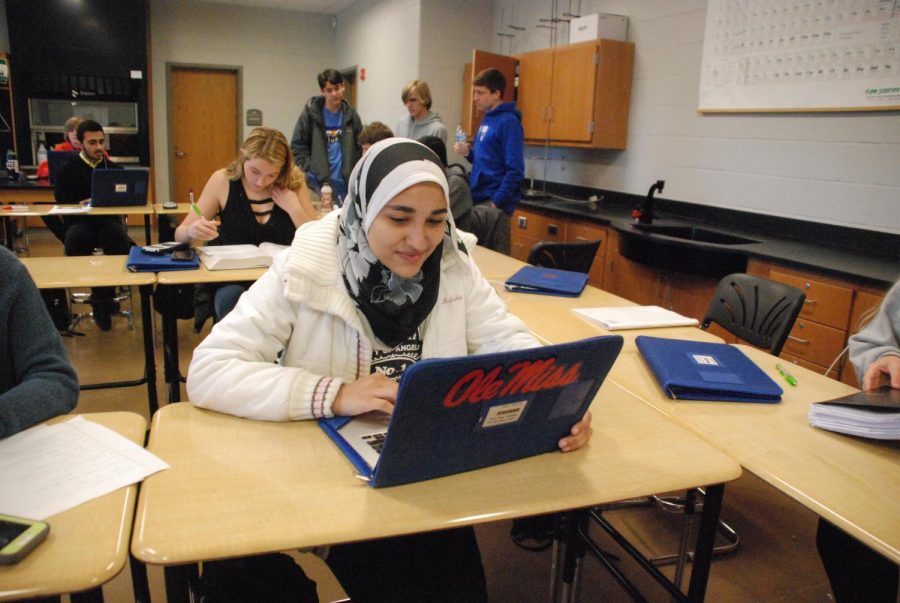 Senior Heba Marzouk continues to work hard towards her goal of graduating early. She decided to graduate early after realizing in her sophomore year that she only needed a few more credits to graduate.

Most students spend four years in high school before moving on to the next chapter of their lives. Some students, on the other hand, want to leave high school sooner. These students are graduating early.

“When I was doing my schedule for sophomore year, I realized that after I get over with sophomore year, I will have 20 credits out of 24, so it was really meaningless for me to sit at high school for two more years,” senior Heba Marzouk said.

Marzouk has already been accept into a pharmacy program at Ole Miss as a 16-year-old.

“In the program I entered, we all are going to be together for seven years,” Marzouk said. “I’m pretty sure we’re going to have friends, but I feel like they will look at it more like ‘Oh, you’re young, you’re smart.’”

Senior Tamara Mayes decided that she wanted to graduate early so that she could get a jump-start on her life after high school.

“I think that I’m ready for college, and I will like a new environment,” Mayes said. “I’m just ready to start a career.”

Junior counselor Regina Carothers is helping these students in getting ready to graduate early. Once informed that a student wants to graduate before their senior year, the counselors make plans to ensure the student reaches the requirements for early graduation.

“You need to let the counselor know that you want to do it, and then we’ll do a graduation plan and check and see how far you are and what could we do to make it happen with however early that you want to graduate,” Carothers said.

The rules of early graduation have almost equal requirements to that of regular graduation. After this year, freshmen entering OHS will have some slightly different requirements if they wish to graduate in under four years.

Even without the extra requirements, Carothers pleads with students to take a lot into consideration before making the decision to graduate early.

“I think the big thing is it’s kind of become trendy to do it rather than really thinking about how is this early graduation going to affect you,” Carothers said. “You really have kind of made friendships with people, and you’re going to lose that by graduating early. And then when they have class reunions and that kind of thing, you’re not really going to fall into a group that you’ve bonded with. You’re going to be in a different group, and I don’t think people think about that before they do it.”