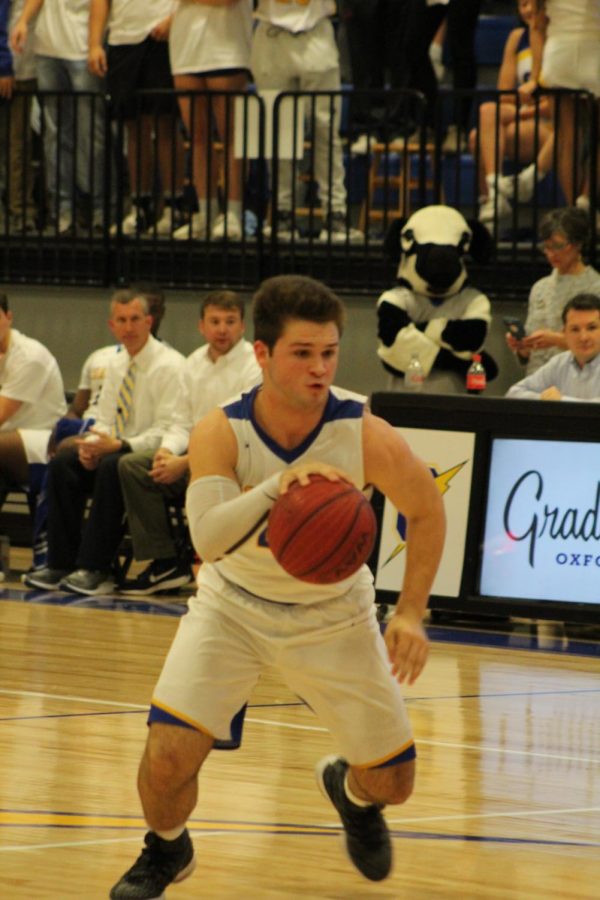 Senior forward Drew Bianco drives to the basket in their 62-59 overtime win against Independence.

Both Oxford basketball teams competed in a school-day game against the Independence Wildcats. The girls team took the floor Monday afternoon in front of a packed OHS Gym, but could not get the job done as they fell 53-44.

“This was one of the most fun games I’ve ever coached,” Oxford girls coach Cliff Ormon said. “The environment was really something special, I wish we could have pulled out a win in front of all the students.”

“Defensively we have to start blocking out better,” Ormon said “We had a lead and then they started grabbing more and more offensive rebounds and that swung the game. The turning point was the offensive board that they put back at the buzzer to take a lead into the half.”

During the second half, Oxford established a presence inside with sophomore Ashley Cook. Cook finished the game with 16 points in her first career start.

“I definitely think we found a weapon in the inside game,” Ormon said. “Ashley Cook started for the first time today and had 16 while Zharia Metcalf had nine so we got 25 points just from our post players around the basket.”

Despite the scoring in the post, Oxford could not keep up with the three point shooting of the Wildcats. Every time Oxford would come within a possession of tying it, Independence would bounce back and hit a big triple.

“Independence hit lots of timely threes,” Ormon said. “They made us pay because we ended up playing too far in on the help and they reversed the ball quickly.”

The Chargers won an overtime battle 62-59. Oxford had a lead as big as 15 but the Wildcats clawed back to force overtime.

“It’s always nice to get one of those under your belt,” senior forward Drew Bianco said. “We love to be able to get reps in close games before division play, this should not have been one of those close games. We have to play better than that.”

Independence (4-5) got hot from deep in the second half and clawed their way back into the game after being down 12 at halftime. Oxford (8-0) tried to switch defenses throughout the second half, but it seemed to result in miscommunication.

“We were extremely complacent,” Oxford coach Drew Tyler said. “I think that they were the action and we were the reaction which led to lots of three-point plays. When we aren’t jumping to the ball and we get caught out of position, it’s really frustrating.”

The Chargers got into foul trouble in the game due to lackadaisical defense and it resulted in two big men fouling out. Tucker Scott and JJ Pegues both fouled out late in the game forcing Oxford to play four guards.

“I felt like we had a lot of lulls today,” Tyler said. “We actually had two guys foul out of the game and that led to me having to sub and change defenses with different personnel in the game. It seemed like we were behind the eight ball.”

Despite the mistakes, the seniors for Oxford took over down the stretch and brought home the victory. Hiram Wadlington knocked down free throws for the win with 3.9 seconds remaining. Scott hit two big 3-pointers to start overtime. Bianco led all scorers with 24 points.

“The scoring will come and go,” Bianco said. “Tuck hit big 3’s and Hiram did a great job handling the ball, and hit big free throws. We did what was necessary in order to win.”

Oxford hosts Lafayette on Friday in the first of two Crosstown Classic meetings. Girls game tips at 6:00 p.m. with the boys to follow.