District receives unexpected week out of school due to icy roads 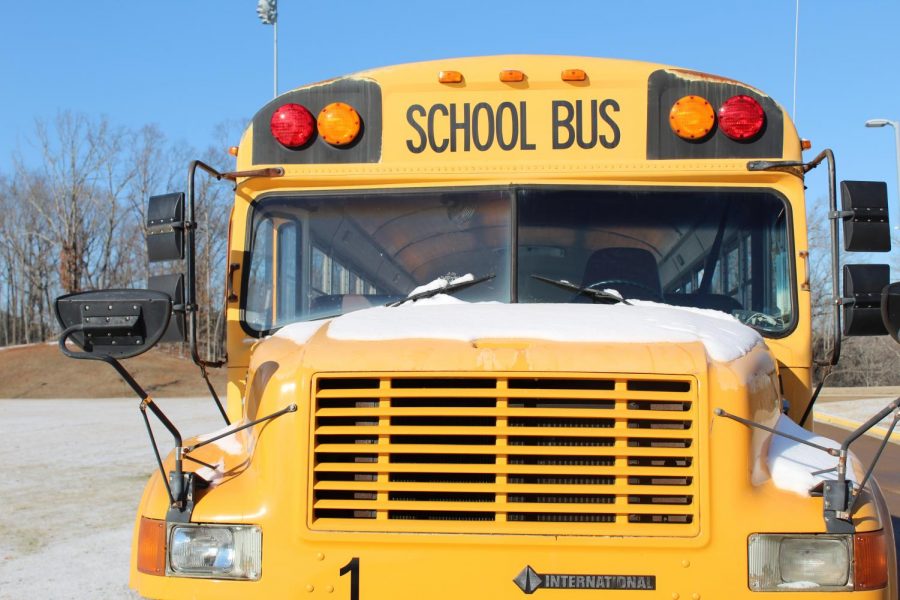 School bus gets covered in ice and snow during days out of school. Students did not have to go to school from Jan. 12 through Jan. 18.

As more snow days were added, students were left wondering if they would have school the days at all during the week.

“I figured we would have one or two [snow days], but I really didn’t expect as many as we got,” junior LilaGrace Lara said.

Assistant Principal Chandler Gray acknowledges that some of the roads were clear to drive on. However, the district could not have school until the roads were completely safe.

“If you’re putting any kids in danger whether they’re driving themselves or their parents are driving or the bus is riding on the roads, then you really need to use caution,” Gray said.

Stella Lindsey was anticipating the snow day. She had grown up checking the weather because her father owned a farm.

“Even though my income is no longer tied to the weather, I still have a habit of keeping up with the long range forecast,” Lindsey said.

However, Lindsey did not expect multiple snow days. She plans on condensing essential information in her classroom to get her students back on track after missing five school days.

“We are behind in our pacing for the semester so I’m rescheduling tests and changing due dates on assignments,” Lindsey said.

Gray is confident in the teachers’ abilities to get their students caught up. He also says some teachers have built in extra days for when they are sick or may miss class.

“I think that they’ll find a way whether it be finding lessons that might not be quite as important to pull out or spend less time on certain things, ” Gray said.

“I’m one of those people that sleeps until one in the afternoon, and then stays in bed for hours after that,” Lara said. “I spent a lot of the break binge watching ‘Will and Grace’ and ‘90210.’”

Although the snow days set her class schedule back, Lindsey enjoyed the extra days off and spent them doing research for her classes along with watching Netflix in her free time.

“Holidays, like Thanksgiving and Christmas, are always so full of activities, which I thoroughly enjoy, but having completely unstructured downtime is important for all of us,” Lindsey said.

In spite of the break, Gray began to miss school and the high speed work day. He enjoys being on task and keeping things on schedule.

“Honestly, it sounds corny and kind of lame, but I love what I do,” Gray said. “I love being here with the people I work with and the kids.”

Overall, teachers and students were happy to have the break. Gray says the state department will decide how many days students will have to make up.

Sophomore Reed Parkinson believes students will have to buckle down when school starts again. Lara is also ready to face the large amount of work she will have to catch up on.

“I think school will be hectic because we are going to have to do a full week of lessons and assignments in two days,” Parkinson said.

Gray says school is now in crunch time. He believes students should communicate with their teachers to help them get back on track. Gray also warns that state tests are coming up, and students should be prepared for that as well.

“I think communication is the most important thing,” Gray said. “Teachers communicating with the students, how they’re going to do this, and students taking their part in communication and doing what their teachers ask.”