Eight artists to watch in 2018 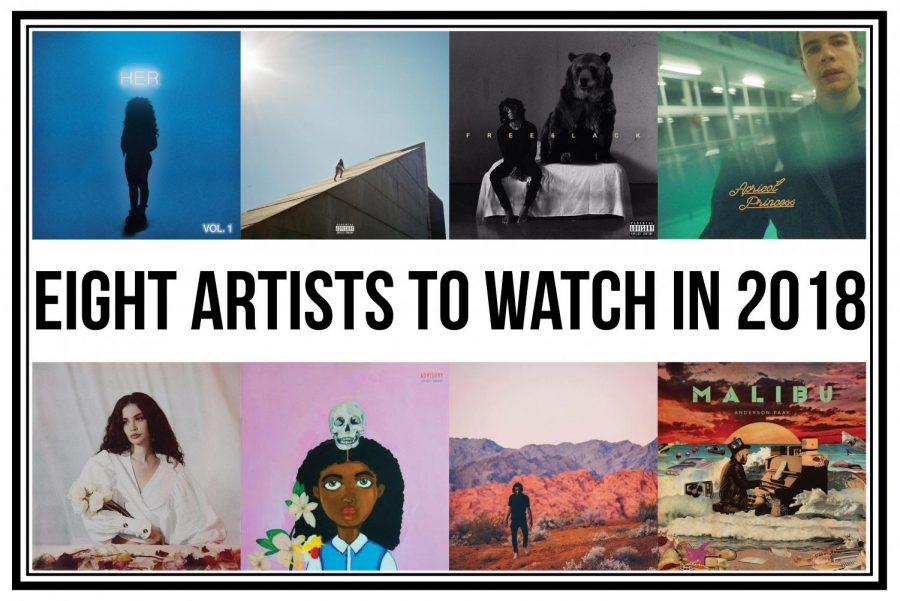 2017 was probably the best year for current R&B and rap music by far. Not only did it bring us several impressive and successful albums and singles from mainstream artists, but it also brought us a new wave of talented artists that are bound for success.

In this day and age of music, it’s easy to get lost amongst all the overwhelming amount of artists and genres. Sometime’s it’s difficult to find a sound that’s new and exciting, but I guarantee these artists each bring an interesting and unique vibe to the R&B and Rap genres.

Gabrielle Wilson, better known by her stage name H.E.R., meaning ‘having everything revealed,’ is one of the more well-known artists on the list, but that doesn’t mean she’s undeserving of attention. In 2016, her debut self-titled EP, including her hit song, “Losing,” which landed a spot the iTunes Best R&B/Soul Albums, with over seven million views for the music video. H.E.R. brings a unique, slower feel to R&B. I definitely recommend her music, especially for fans of dvsn, SZA or Willow Smith.

Canada-based artist Daniel Caesar, popularized by his song “Get You” featuring Kali Uchis, is another show stopper. Caesar, for me, is the personified version of reading a good book. Caesar’s voice is unique and sultry, when necessary, making him stand out from the seemingly never-ending crowd of up and coming R&B artists.

6lack, pronounced ‘black’ not ‘six-lack,’ is a native of Atlanta who brings a more emotional, slower edge to rap with lyrics that focus on the realism of relationships, like breaking up. With his mellow voice and a chill beat behind him, I couldn’t refrain from putting him on my list. I strongly urge fans of Bryson Tiller, dvsn or Travis Scott to give his music a try.

Alex O’Connor, more commonly known by his stage name Rex Orange County, is an English artist that takes a more comedic approach to rap. His song “Uno” was featured on the Netflix Original “Dear White People,” which earned him some praise and recognition, but not nearly as much as he deserves.

California-born Brandon Paak Anderson, under stage name Anderson .Paak, is a singer, songwriter, drummer and rapper, in addition to being part of the music duo NxWorries. Anderson’s style consists of making songs that are symbolic to simply having a good time. His semi-childlike voice does justice to every beat he’s featured on and I recommend any of his music to fans of Goldlink, Smino or BJ the Chicago Kid.

Tahj Malik Chandler, better known as Saba, is another native Chicago artist who was popularized by being featured on Chance the Rapper’s song “Angels,” but rest assured—Saba doesn’t need features to be labeled as a good artist. His latest album, “Bucket List Project,” features other less-known artists, such as noname, Smino and Ravyn Lenae, all of whom add to his symbolic approach to rap. Taking his struggles, atmosphere and fantastic beats, listening to “Bucket List Project” is not only an enjoyable experience but also one that causes listeners to think about his lyrics. For fans of Chance the Rapper, Smino and Monte Booker, Saba is a great fit.

Fatimah Nyeema Warner, under the alias of noname, is a Chicago-born rapper and poet who utilizes her writing skills to benefit her music. She was also featured on Chance the Rapper’s album, “Coloring Book,” along with some of his previous releases. For fans of music with substance, great features and music that has a spoken word vibe to it, noname is your girl.

Sabrina Claudio, a native of Florida, started her music career by uploading a few of her songs to Soundcloud, which ultimately led to her first album, “About Time.” It featured Claudio’s soft, soothing voice on a several romantic, slightly sensual tracks. Claudio has such a unique voice that effectively relaxes and soothes any bad mood. For fans of mellow and relaxing music, I highly recommend keeping an eye out for her this year.