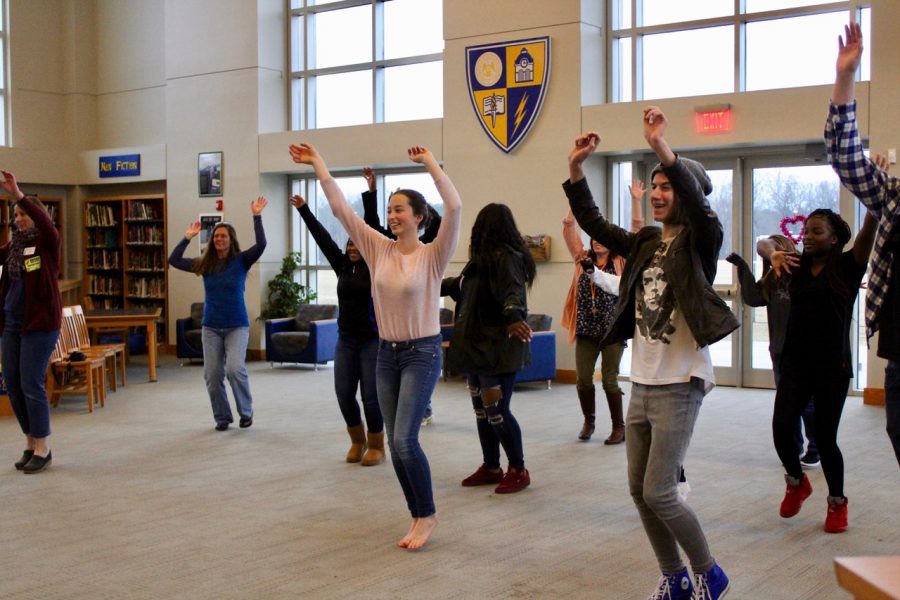 sophomores Sophie Quinn and Jupiter O’Donnell do the warmup dance at Moving Metaphors. The event was held on Feb. 6 in the library.

The “Moving Metaphors” program recently made its appearance at Oxford High School allowing many students to experience the arts in a new, more direct way. This program reached Oxford High School through the partnership held between Ole Miss Student Dance and the local public library in Oxford.

“Some members of Ole Miss Student Dance were involved in the summer doing programs with [students], and we wanted to do a little bit more and wanted to start it in the public schools,” Ole Miss Student Dance member Victoria Burrow said. “We paired together to figure out what we can do in high schools around Oxford to establish more of dance presence there.”

The program was held in the Oxford High School library, allowed students to sign up to follow the dance exercises and techniques led by Burrow. The program also offered free cookies to anyone who came to the event. Sophomore Sophie Quinn was one of the students who participated in the event.

“I like poetry, and I am a dancer so I thought it would be fun to combine them. Also, free cookies,” Quinn said.

The event lasted the duration of power hour and had a broad variety of different techniques and dancing routines that were shown to the participants. One of which was a simple state your name “game” with a twist.

“[My favorite part] was when we got in a circle and [showed] how we were feeling. I like to do any type of dancing,” sophomore Gerryka Pomerlee said.

The name game was an introduction exercise that was used to describe the different emotions of each student. Along with this, the students also got to choose their own poem and perform a routine relating to their chosen poem.

“[The exercise] was fun to read the poetry and fun to see what people came up with when they put movement to words,” Quinn said.

The “Moving Metaphors” event was the first event that was held by the public library and Ole Miss Student Dance program at Oxford High School and, according to Burrow, hopefully will not be the last.

“[The goal] I think is just to be more comfortable in movement and maybe open themselves up to poetry or to expressing themselves through the arts so just learning more about themselves and the arts in general,” Burrow said.