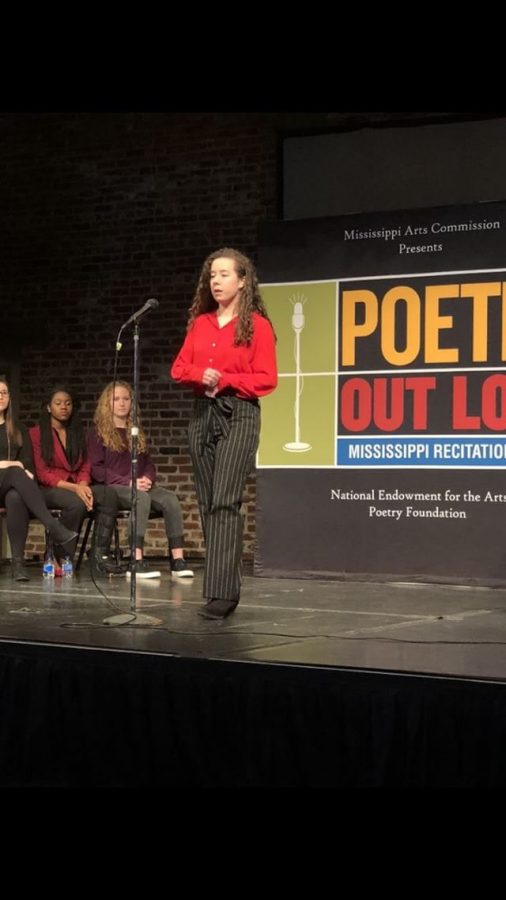 Junior Anna Claire Franklin recites her poem in the Regional Poetry Out Loud contest. She won first in the competition and will compete in the state competition March 6.

Oxford High School student and junior Anna Claire Franklin won the Regional Poetry Out Loud contest on Feb. 5. Poetry Out Loud is a contest where students memorize and recite poems, which helps them master public speaking skills, build self-confidence and learn about poetry.

“It’s a competition where you memorize and recite up to three pieces of poetry, and you’re judged on things like accuracy.” Franklin said.

Millions of students around the world have been influenced by Poetry Out Loud, with contests taking place in every state. Franklin was first introduced to the contest during a presentation in her debate class and decided that it would be a good idea to compete.

“Oxford is such a competitive school academically, so anything I can do to stand out and compete in, I should do,” Franklin said.

Competing students are allowed to choose the poems that they recite. They get to pick from a collection of over 1,000 published poems.

“I actually found a couple poems that I really like and I think are beautiful.” Franklin said. “It’s always a cool thing to find something you relate to in a place you don’t expect it.”

Each student has to completely memorize their poems, practice reciting their poems and work on their overall presentation.

“A surprising amount of effort goes into it because the judges can kill you over the smallest gesture,” Franklin said. “You have to practice in a way that makes it look like you haven’t been practicing, which is really hard.”

“We spent some time just working and practicing one-on-one,” Osborne said. “We’ve been working on her understanding the meaning of the poem and how she recites the poem clearly.”

Franklin recited her poems at the regional contest and was genuinely surprised that she won.

“I figured that there were maybe four in the competition that were pretty good and didn’t put myself in that four,” Franklin said. “Then they announced my name, and I realized that I had actually won.”

After winning the regional contest, Franklin will advance to the state competition on March 6 in Jackson, Miss.

“I’m pretty nervous about state, but I’m really just going to try and have a good time and compete,” Franklin said.