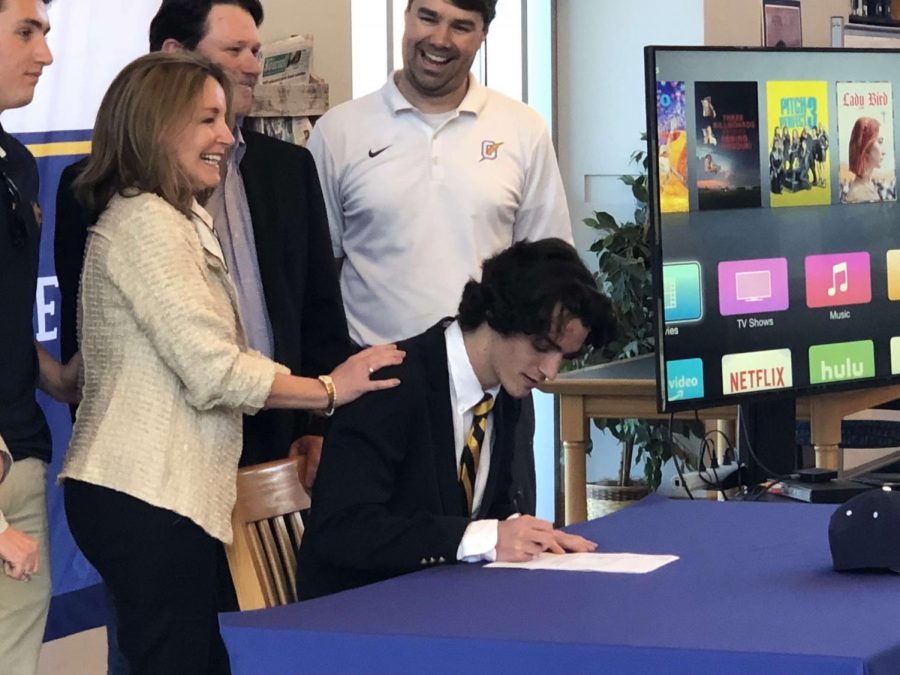 Senior Keaton Calhoon, with his family, signs to play soccer at Mississippi College.

On Friday, seniors Josh Fulton, Keaton Calhoon, and Davis Carwyle made the decision to further their soccer careers by signing to play college soccer. Fulton and Calhoon signed with Mississippi College, and Carwyle signed with Northwest Community College.

For Calhoon, proximity and the opportunity to play with a teammate and friend brought him to sign with Mississippi College.

“I chose Mississippi College because it’s not too far from home,” Calhoon said. “Also, my brother Cole and my best friend will be a part of the soccer program.”

As for Carwyle, the biggest factor in the decision to sign with Northwest is how close it is to his home.

“I decided to pick Northwest because of its location,” Carwyle said. “I am a home body, and being close to home was always a big factor in me picking which college I would choose to continue my soccer career. I also loved the campus. It was the biggest one that I got to visit, and all of the buildings were fairly new.”

Playing college soccer has always been Fulton’s dream. He has faced adversity and overcome many obstacles, the biggest of which was not even making the team just years ago.

“It’s been a dream of mine ever since I can remember,” Fulton said. “Going from not even being able to make the team four years ago to now going to play soccer for Mississippi College is nothing but a blessing.”

While Fulton has been very successful as a high school soccer player, he does not take any of the credit for it.

“The only reason I am where I am today is because of my Lord and savior Jesus Christ,” Fulton said.

This kind of success in sports doesn’t come without putting in hours and hours of work behind the scenes.

“I put in hours and hours out at FNC Park that nobody saw to reach my highest potential,” Calhoon said. “I trained four times a week an hour away in Memphis, where I put myself in an environment that was always pushing me to improve.”

Carwyle and Calhoon pushed each other to improve off the field to get stronger on top of all of the normal workouts that all of the other soccer players were doing.

“I did a lot of things, but I think the best thing was trying to workout and stay strong during my junior and senior year,” Carwyle said. “Last year, me and Keaton would wake up three days a week before school and go work out together.”

Fulton, Calhoon, and Carwyle put in the work that got them to the college level of soccer. Looking ahead to their first year of college, their effort and mindset has to stay the same.

“I don’t necessarily have any expectations,” Fulton said. “I’m just going to work hard on and off the field and see where that leads me.”