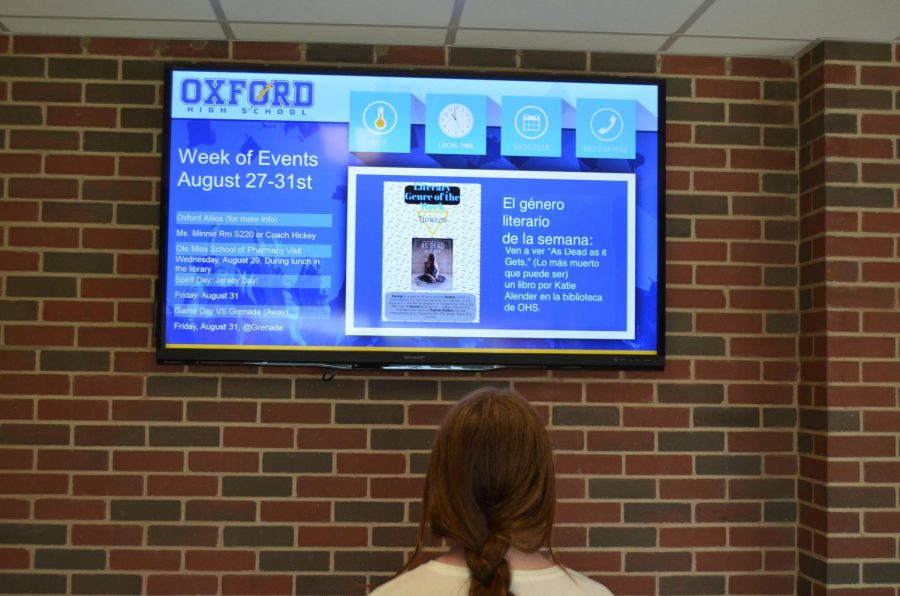 A student looks at the translated version of the school announcements on the televisions in the hallway. Spanish teacher Emily Maples has been working to implement more Spanish translations throughout the school.

According to nypost.com, there are over 41 million native Spanish speakers in the United States. That is around eight percent of all Americans, not counting the millions who speak Spanish as a secondary language. OHS Spanish teacher Emily Maples helped implement the translation of announcements from English to Spanish on the hallway televisions.

The televisions that are set up in many of the hallways and in the commons have previously not effectively displayed announcements. This year, they have been managed and have been up to date with announcements from the school, the current time, and other things. Sophomore Josuee Carrasco is a native Spanish speaker who also speaks English, and he says that he hasn’t noticed the monitors in Spanish.

“They didn’t really use them last year for anything, so I haven’t even looked at them this year,” Carrasco said. “I guess it could help like some of the Spanish kids who don’t speak English as well as me.”

From the time that the televisions were set up in many of the hallways, they have never consistently worked throughout a school year and haven’t been successful in displaying helpful information to students. Throughout the first four weeks of school, the television monitors have shown announcements, Spanish announcements, and also the weather.

“Last year since they never kept using them and didn’t put anything on them, I stopped looking,” Carrasco said. “But I guess since they’ve started putting up stuff like announcements, I might try to read them.”

Students in Maples’ multiple Spanish classes will be the ones to translate the announcements from English to Spanish. While helping the Spanish-speaking students, these students will also be learning more of how to read and write in Spanish.

“It’s also an opportunity for my classes to work on their Spanish by translating something and seeing it being applied in a relevant way in the school,” Maples said.

Maples hopes that with the televisions being translated in Spanish, Spanish speaking students will feel more accepted in a school primarily of English students.

“I don’t know if they will be helpful or not, but I hope that if they see just one announcement in Spanish that it will make them feel more welcome,” Maples said.