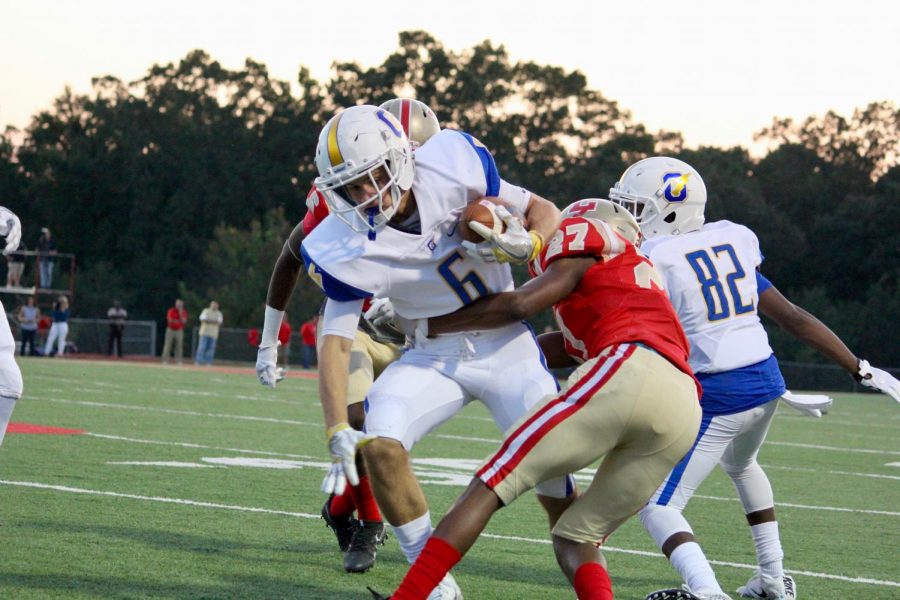 The Lafayette Commodores travel the short distance to take on the Oxford Chargers in the annual “Crosstown Classic” rivalry game. Lafayette comes in having won their first three games including last weeks 33-14 win over North Panola. Oxford comes in with a 1-1 record after last weeks impressive 39-0 win over Grenada. Oxford won last year’s meeting 41-17.

Lafayette DB/WR Brandon Turnage- Turnage is a four star recruit committed to Alabama. He has been extremely effective for the Dores and is a versatile playmaker on both sides of the ball.

Oxford QB John Meagher- Meagher had a fantastic game last week throwing for 144 yards and two touchdowns in the win over Grenada. Facing a talented Lafayette defense, Meagher needs to have another great game if Oxford wants to score points.

Lafayette LB Eric Jefferies- Once an Oxford Charger, Jefferies has moved to the other side of town and has made an immediate impact in his first season. Jefferies will play all over the place in the front seven, both rushing the passer and playing some middle linebacker. Jefferies has 17.0 tackles and 3.0 tackles for loss.

Oxford ATH Jeremiah Pegues- Pegues is a physical specimen that Coach Cutcliffe will move all over the field on offense. He will take handoffs in the backfield, catch passes out wide, and even sometimes take the direct snap as the quarterback. Pegues presents a matchup problem for any team lining up defensively, and Pegues’ usage could cause problems for the Lafayette defense.

Oxford DB Byron “Tank” Pearson- Pearson has been fantastic in the early going for the Chargers. He has racked five pass defenses and had two interceptions including a pick six in last weeks win over Grenada. Pearson could potentially draw the matchup with Brandon Turnage, and if not he will still be matched up with one of Lafayette’s top offensive weapons.

Oxford RB Kelvin Wadley- Wadley is the starting running back for the Chargers but has struggled to get going in the early season. Wadley is a talented back and if he gets going tonight, it will bring a whole different dimension to the Oxford offense and could potentially flip this game on its head.

Oxford had a nice turnaround last week on the road at Grenada and carries momentum into this game, but Lafayette is one of the best teams in Mississippi high school football this year. The rivalry game should be exciting into the fourth quarter but expect the Dores to pull away late. Lafayette wins 27-17.