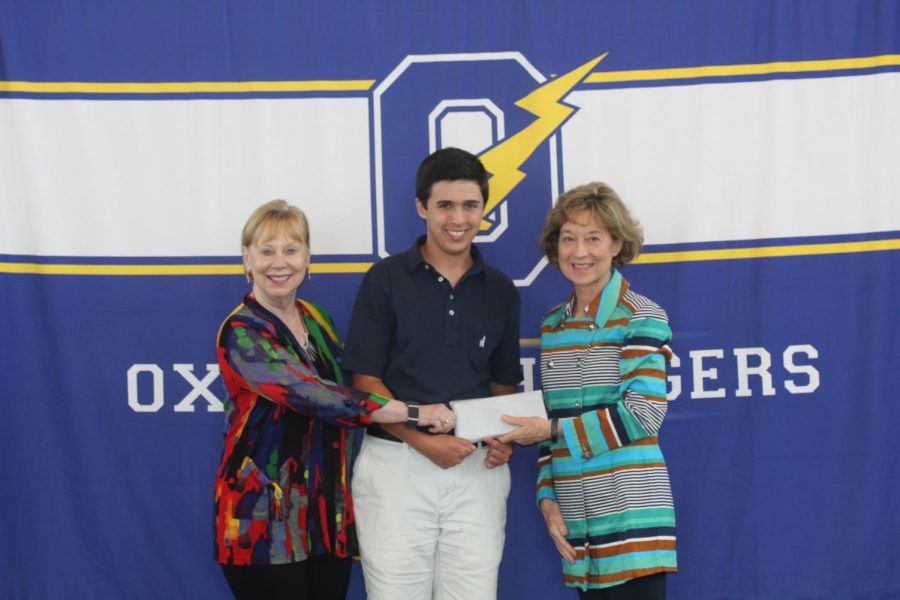 On Saturday, Aug. 11, OHS senior Jack Ligon hosted the second annual tennis tournament to raise money for Memory Makers, a respite day program in Oxford that provides socialization, refreshments and activities for people who are living with early to moderate memory loss due to Alzheimer’s or a related disorder.

The tournament was held at the FNC Tennis Center. Players paid a base fee of $20, but people could also enter a raffle, bid on a silent auction or donate.

“Memory Makers is a nonprofit organization, and it’s fairly cheap to go there,” Ligon said. “People who are diagnosed with Alzheimer’s but still live at home can come to Memory Makers for a day of crafts, activities, brain games and a homemade lunch.”

Ligon reportedly raised approximately $15,000, with support from Providence Companion Care and The Blake, a retirement community in Oxford which serves those with Alzheimer’s in a special unit for memory care. All of that money is being donated to Memory Makers to help run the program, which is located off of Jackson Avenue on Heritage Drive.

“One hundred percent of the profit is going to Memory Makers,” Ligon said. “They no longer have a grant from the Department of Mental Health, and they’re really struggling to keep their doors open. To help make up for the loss of funds, that money is coming from this tennis tournament.”

Dr. Jo Ann O’Quin, Co-founder and Board Member of Memory Makers, emphasized the importance of the fundraiser Ligon created for them.

“Since Memory Makers primarily relies on contributions raised through grants, individual and corporate donations, and fundraisers, the money raised by the second annual Tennis Tournament will be invaluable,” O’Quin said. “It is especially crucial at this time since a state grant is no longer available, and several donors are no longer in the area.  These resources will allow us to keep the program low-cost ($20.00 day) and even provide scholarships to those who cannot afford the daily costs.”

Sophomore and Students for Alzheimer’s member Carter Young has a personal connection to Alzheimer’s. His great grandfather was diagnosed with the disease.

“It means a lot to me that I am able to do what I can to help those diagnosed with Alzheimer’s,” Young said. “They are the sweetest people and a joy to be around.”

Ligon decided to donate the money to Memory Makers after being shown around the facility and getting the chance to see the kind of impact they have on people with Alzheimer’s.

“I was taken on a tour of the facility, and I thought it was awesome, and I decided to give them all of the money,” Ligon said. “They reached out to me, and I appreciated all the work they did and decided that’s where the money needs to go.”

One of the biggest selling points for Memory Makers is that, according to O’Quin, it provides support for both the participant and the caregiver.

“I have been running the Alzheimer’s and related dementia caregiver support group for over 33 years,” O’Quin said. “Some of the caregivers that have benefited from the program report to me such statements as ‘this program has been a life-saver’, ‘I’m not sure what I would have done without it,’ and ‘Memory Makers allowed me to have 4 hours by myself for the first time in four years of taking care of my mother!’”

“Student’s for Alzheimer’s really encompasses two things,” Ligon said. “During the school year, we go and volunteer at the Blake for about an hour or two hours on Sundays. At the end of the year, we start getting ready for the tennis tournament, which is the big thing that Students for Alzheimer’s does.”

Ligon wants people to know that volunteering with people with Alzheimer’s is fun and fulfilling, and not the awkward or scary experience that some people anticipate.

“A big reason that young people don’t volunteer with them, and they just go to the humane society or a soup kitchen instead, is because they think it’s scary,” Ligon said. “They think these people are crazy, but they’re not. They’re really nice people, and they’re thankful to have people talking to them. It’s a lot of fun, and everybody’s super nice.”

According to O’Quin, people can help those with Alzheimer’s and their caregivers by spreading the word about the program, volunteering, donating, or continuing to help with fundraisers. Visit www.memorymakers.org or search Memory Makers on Facebook for more information.