Tiger Woods: Back and better than ever 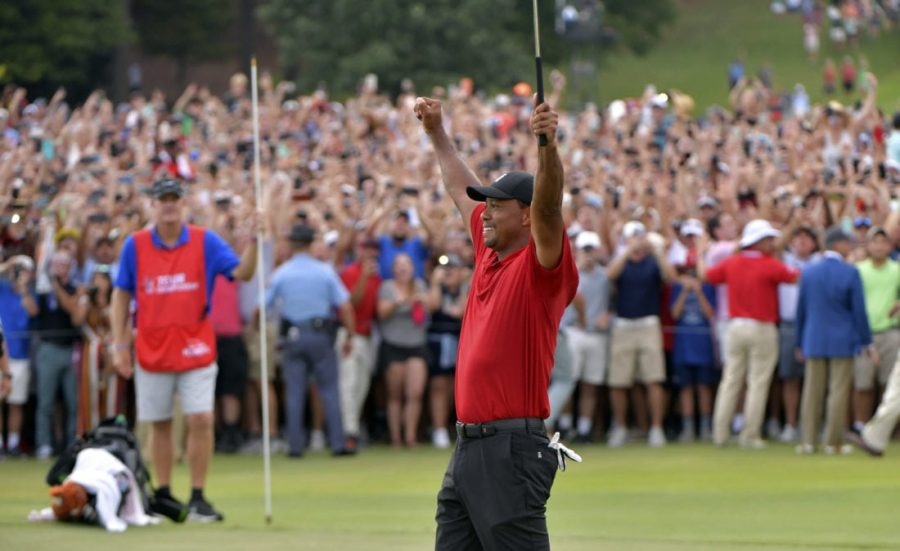 Tiger Woods raises his hands in triumph after shooting his final hole. This weekend, Woods won the PGA Tour Championship for the first time since 2013.

With his 80th PGA Tour win last weekend in Atlanta, Tiger Woods is out of his “slump” and is back to playing the golf he was playing years ago. He has not won since 2013, and this was one for the books.

Woods has continued to play after several surgeries, including four back, correcting issues with his left knee, and both of his Achilles Tendons.

Almost 22 years since his first PGA Tour win, he is back, and ready to play the Masters in April 2019. His game will just be progressing. Unlike popular opinion, Woods did not peak a few years ago, but he just had a few setbacks.

Woods is a phenomenal golfer, and last weekend was a tournament that would forever be remembered because this so called “slump” of Woods is gone, and it might not have ever been there in the first place.

He has always been a great, strategical, and skillful golfer, but last weekend gave him his confidence back. He will be out there. From now on, he is going to be number one. No doubt, he will be winning tournaments because he has higher expectations again. His expectations were lowered when he had his surgeries and was coming back from those injuries. Now, there are no excuses for when he does not win because he has potential again.

He had injuries, but his golf game was the same. Since he is no longer in pain, he can play like he did before. This is the time for Tiger Woods to get back on top and be as good or better than he was in his earlier years. Woods is playing without pain, so he will be back to being an unbelievable golfer.