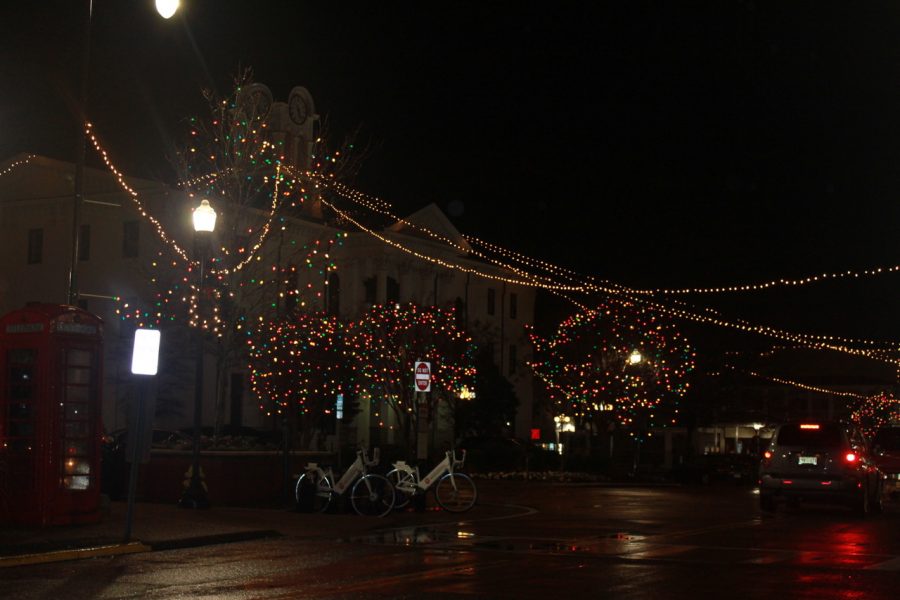 Lights adorn the Square in Oxford, Miss. Mayor Robyn Tannehill brought back old Oxford tradition of having Christmas lights on the Square this year.

Mayor Robyn Tannehill brought back the tradition of having lights adorn the buildings and areas around the Square in order to bring Christmas cheer this year.

Tannehill decided that she would bring back the tradition Oxford had in the 1950s and 1960s because she believed that it would do good for the town to have the beautiful lights.

“I heard people say, ‘I just wish you could have seen them. They were magical,’  They are one of my most cherished memories of growing up in Oxford,” Tannehill said. “I fear that as Oxford grows so quickly we are losing some of those things that will be treasured memories.”

“I found that the lights hung in the 50s were 100 watt bulbs and were red, blue, green and orange. The infrastructure in place couldn’t support that load today as the downtown area has grown tremendously since those days,” Tannehill said. “We were also concerned about the posts supporting the heavy weight of the new lights.  We had concrete specialists and engineers come in and test our poles and install additional poles to support the strands of lights.  We knew we had to use LED lights, and unfortunately, colored LED lights produce a really cold, bright light.  After testing multiple strands, we found a white LED light that I think has a natural glow.”

Only two strands of lights were put up per day, and there are a total of 14 strands with the longest being 250 feet and the shortest being 185 feet. The Building and Grounds, Electric, and Street departments were all involved in the process, and there were 14 employees involved: Greg Pinion, Mike Grant, Tyler Sharp, Shane Arbuckle, Nick Mathews, Don Smith, Desman Ivy, Rob Neely, Benji Hanks, Bobby Hervy, Jake Hill, Johnathan Arbuckle, Ken Knight, and Chad Coleman.

“They did all of the engineering and planning and ordering and installing. It took several weeks to install the lights,” said Tannehill.

Students were at the lighting ceremony and are happy that Oxford was able to revamp traditions.

“We respect traditions,” junior Stetson Ponder said. “[The Square] is definitely brighter, and it makes me purposefully go out of my way sometimes at night just to go through the square. I think they are so cool to drive through.”

English teacher Amanda Witt also thinks that the lights give the Square a whimsical excitement and more of a family feel.

“I guess for me right now, because for me as a resident, Christmas time is always nice because the college students are gone,” Witt said. “I think more families are able to get onto the square. You notice more families out taking pictures with the lights. And so for me, it just gives more of a sense of a family like atmosphere.”
The lights give an effect to the Christmas season unlike any other. This year, and most likely for the years to to come, the square is lit up.

“I am so pleased with the final product! It is important to me to bring back traditions with a new twist. We live in a special town. I believe it looks like a snow globe,” Tannehill said. “I was really proud to see the videos on ESPN during the Egg Bowl. It reminded me why I love this town so much.”