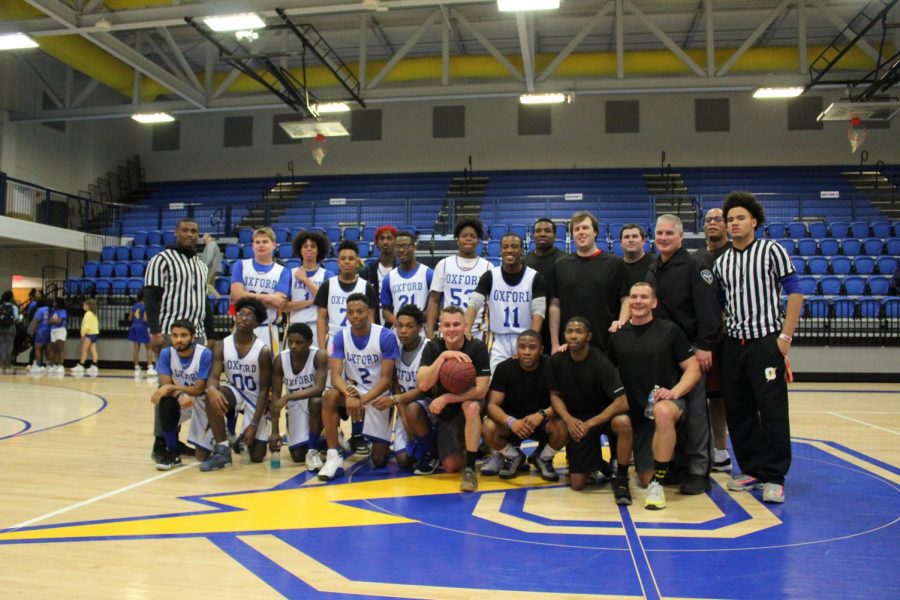 Unified Sports basketball team, Oxford Police Department officers, and the Unified Sports' referees stand and smile after their game. The game resulted in a tie with a score of 40-40 after game tying threes were scored in the final seconds.

During lunch on Wednesday, March 6, 2019, members of the Oxford Police Department (OPD) took on the OHS Unified Sports basketball team in a bit of friendly competition.

The OPD got off to a strong start, building a 16 point lead in the first quarter. However, led by the lights out shooting of junior Paul Turner, the OHS Unified Sports team charged back to make it a close game. With a minute left, the teams were tied 37-37, and as the clock wound down, both teams hit threes, ending the game in a 40-40 tie. Turner, who had the hot hand all night, wished they could’ve played some extra minutes to determine a clear winner.

“I think we should’ve gone to over time to show them what’s up,” Turner said. “They said I had like seven threes. They were running a 2-3 zone, so the corners were open, and we would just wrap around to the corner.”

Senior Darius Pettis wasn’t pleased with his personal performance, but he was proud of how the team played.

“I didn’t play that well. I had zero points,” Pettis said. “The team played excellent. I expected us to beat them really easy, but they were better than I expected.”

Senior Bhanuka “Bono” Jayaratna played a key role in the success of the unified team, but he wasn’t able to play as well as he would’ve hoped because he was playing through an ankle injury.

“We played great. I couldn’t play good because my ankle got hurt so bad, so I couldn’t get any points,” Jayaratna said. “I’m just glad we came out here and played ball.”

It takes a lot of practice to be able to play basketball at a high level, and Bono has been putting in a lot of work to try and get to where he wants to be in terms of skills on the court.

“I’ve been shooting threes, mid range, you know. But today I just couldn’t do it. My bad ankle just hurt, so I couldn’t do it today,” Jayaratna said.

School resource officer Zach Anderson said that the team came in with a goal of winning, and a key part of their game plan was to play tight defense on Bono. However, with the game ending in a tie, Anderson considers everyone a winner.

“The Chief of Police wanted us to reach out to our community and find different ways to do it. I knew we had a unified sports team, and I thought it’d be a good idea to get us all together and get the school involved,” Anderson said. “Anytime you can let the kids know that we’re real people, and we love you guys and get to build relationships, I thought it was awesome.”