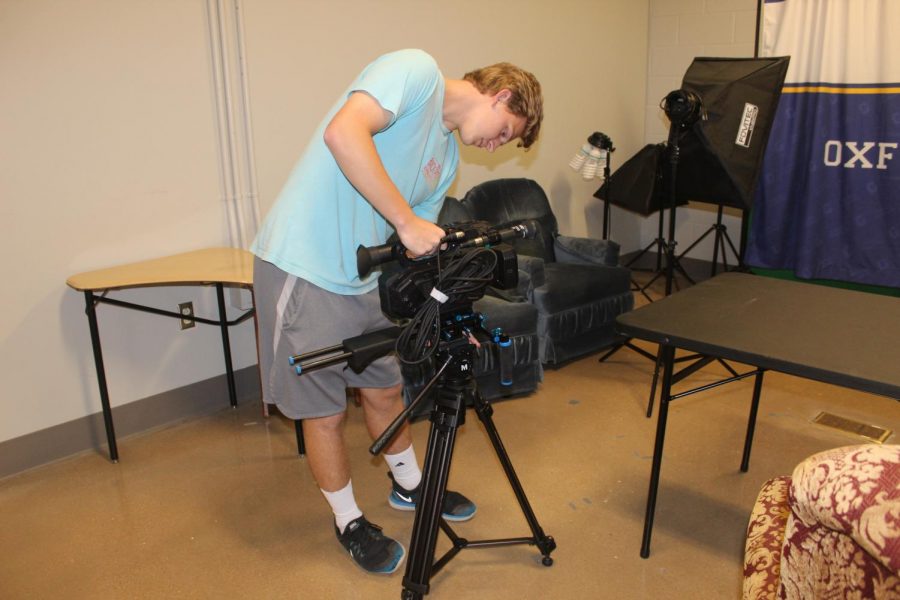 The OHS TV and Broadcast team is bringing exciting new programming this fall. With the renewal of the sports program “The Season” and the introduction of a new news show called “Charger Nation Productions,” the team is adjusting to different challenges. Keith Scruggs, who teaches TV and Broadcast at OHS, said the main reason for the changes was “quality over quantity.”

“We want to concentrate on the quality of the show,” Scruggs said. “We didn’t win very many awards last year, and we heard some good criticism from other shows. We felt like it was time to try something new.”

The new show, “Charger Nation Productions,” will replace “The Snooze” as Oxford High’s news program. The episodes will have a longer running time than ‘The Snooze’ and will feature reporters on-site instead of sitting behind a desk.

“As far as ‘The Snooze,’ we kept it [to] 10-12 minutes, sometimes even shorter than that,” Scruggs said. “This show will be longer, more like 16-18 minutes. And it’s really not going to be a true news show. It’s going to be more like a ‘48 Hours’ or ‘60 Minutes’ type of format. So you’re really not gonna have two anchors sitting there reporting the hard news. I anticipate the anchors standing up and introducing the segment, and we’ll have reporters on video.”

Senior Haeden Overby heads the team that is working on “Charger Nation Productions.” The show will release episodes monthly. By spreading out episodes, he believes the show will have more options to explore new story ideas.

“Last year during ‘The Snooze,’ each episode was pretty much broken up into news from the anchors, then a feature story, and then a game, and that would be ten minutes max,” Overby said. “But this year with the new format, we’re transitioning to an introduction piece from our anchors, which will then lead into a reporter piece by someone that’s not anchoring that episode, and then after the reporter pieces have played, we’ll have a longer feature story than we’d normally do. Last year we would do a three minute feature. This year we’re doing four-six minutes. Then we’d go back to the anchors who will have some kind of a lighter piece, like something to do with the student body that we hope viewers will find fun or engaging.”

Overby, who started working on “The Snooze” last year, said that production issues plagued the show. He thinks that “Charger Nation Productions” will have a more streamlined production process.

“First of all, I think that forcing 16 people into only two groups working on a weekly show ran [us] into a lot of problems with production, and a lot of problems with quality,” Overby said. “We think that moving over to a four week schedule instead of a one week schedule is not only going to give us a lot better quality with features, but we’ve gotten an upgrade with a lot of equipment this year after we showed the administration what kind of stuff we could do with what they gave us. That increase in our budget has been able to help us a lot. We think that this year overall is going to be just a lot higher quality, and we’re hoping that people will want to stick around and watch the longer episode.”

“The Season,” a show documenting sports at OHS, is also returning this fall. Sophomore Molly Cat Tannehill is leading the new production team for the show.

“Mr. Scruggs came to me and asked me if I wanted to be in charge of it,” Tannehill said. “I went home and talked to my family about it, and then we decided to do it, because it’s a great opportunity for me.”

‘The Season’ was originally created during the 2015-16 school year by former OHS student Merrick McCool. It won two national Emmy awards for sports production in 2017 and was nominated for six in 2018. According to Scruggs, the staff finally has enough members to bring it back for another year.

“Last year, we didn’t have the staff available to do it, so it kind of fizzled out after one episode,” Scruggs said. “This year, we have a student (Tannehill) taking over who’s very fired up and energetic and wants to bring it back. She’s already recruited a pretty good team of people to work with her.”

In addition to football and baseball, Tannehill also wants to document the girls’ soccer season and the boys’ basketball season. For now, she’s taking it one step at a time.