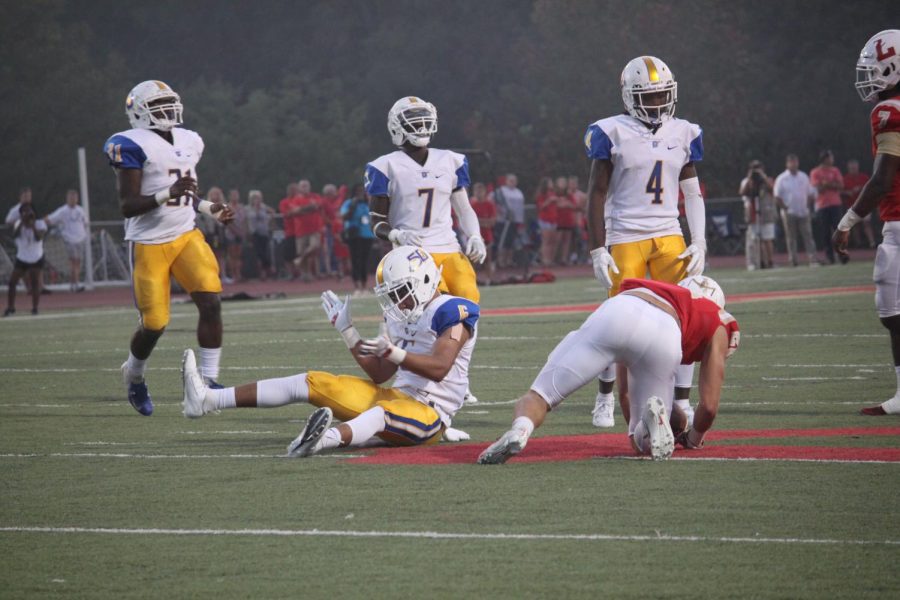 Junior linebacker Tristan Shorter celebrates after tackling a Lafayette receiver. In the third quarter of the Lafayette game, Shorter returned an interception 15 yards for a touchdown.

For the second Charger vs. Charger matchup of the season, the Oxford Chargers will be host to the Southaven Chargers on Friday night. Oxford comes in riding a two game winning streak after a dominant performance over their rival Lafayette. Southaven may have a 1-3 record, but they have had a difficult schedule to start off the season. Oxford won last year’s meeting in Southaven 30-7.

Oxford DB Byron “Tank: Pearson: Southaven’s passing game is stronger than many teams in Mississippi with a talented quarterback-receiver duo in Jordan Hibbler and Derrick Massey.  Pearson is one of the most talented defensive backs in the state and will be in action often against Southaven’s offense.

Oxford DL Jon Michael Douglas: Southaven has a decent offensive line, anchored by three star offensive tackle Kahlil Benson. To disrupt the Southaven run and pass game, Douglas and the rest of the defensive line will need to have a good game against Southaven.

Southaven QB Jordan Hibbler: While the blue and orange Chargers may only have a 1-3 record, those three losses all come against talented teams, such as Whitehaven out of Tennessee and Lafayette. In their lone win, Hibbler threw for 207 yards and two touchdowns against a decent Collierville defense. With another very hard matchup for Southaven, Hibbler will have to perform like he did against Collierville to have a chance against Oxford’s defense.

Oxford QB John Meagher: Meagher had a great showing against Lafayette two weeks ago with 164 yards through the air and two touchdowns on the ground. The key to this matchup, facing a talented Southaven secondary, will be ball security and decision making.  If Meagher can keep limit turnovers and not force any throws, Oxford should be able to avoid any kind of upset from Southaven.

When you look at the seven remaining regular season games for the Oxford Chargers, they should win out. But, this Southaven matchup might prove to be more of a challenge for Oxford than expected, which is why I’m labeling this first region game a “trap” game for Oxford. Granted, I think Oxford’s coaching staff will have the team well prepared and ready to play Friday night. Oxford wins 31-16.