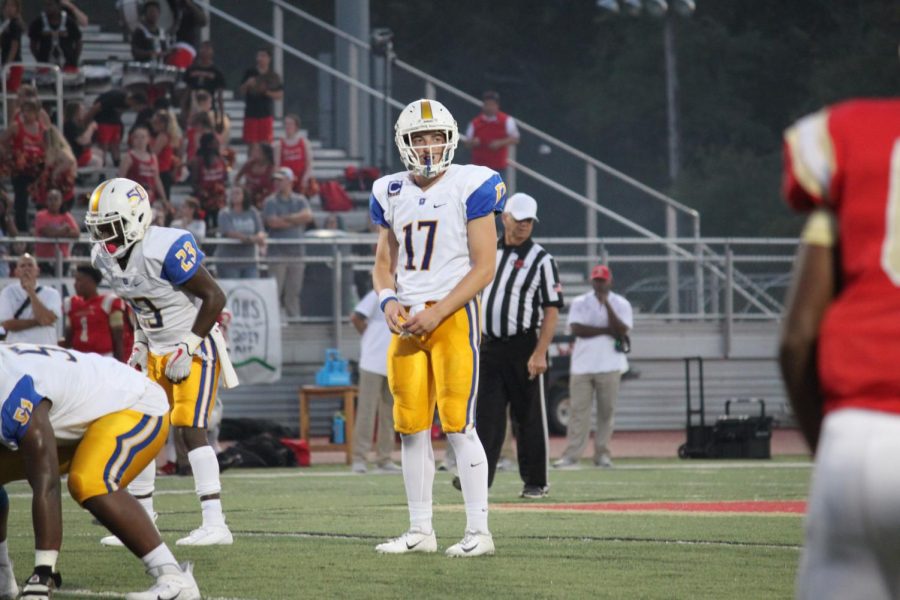 Senior quarterback John Meagher looks to his sideline in the matchup against Lafayette. Meagher accounted for two touchdowns in the 46-7 win over the Commodores.

For their homecoming night, the Oxford Chargers will be hosting the 3-3 Desoto Central Jaguars on Thursday night.  Oxford is coming off of a 21-3 win over Lewisburg where the offense struggled greatly.  The Jaguars lost to last year’s 6A champions Horn Lake 14-0 last week.  Last year, Oxford won a thriller against the Jaguars 21-17.

Oxford RB Omar Howell: Howell, in just his sophomore campaign, has racked up over 220 yards on the ground.  Due to sharing the workload out of the backfield with senior KJ Wadley, Howell’s numbers are down from what they could be if he was the featured running back.  Look for both Howell and Wadley to get many carries Thursday night.

Oxford LB Tristan Shorter: Shorter has made a huge impact on the Charger’s defense this year after moving from safety to linebacker.  On the year, Shorter has 32 tackles, one sack and an interception returned for a touchdown.

Desoto Central DB Branson Tita-Nwa: Tita-Nwa plays all around the Jaguar defense, featuring as a linebacker, cornerback and a safety.  On the season, the junior has 28 tackles, one sack, and three interceptions.

Oxford QB John Meagher: If Meagher plays like he did last week through the air, the Charger offense will struggle again.  Last week’s game against Lewisburg was one of two bad performances for him this year, the prior one being against Starkville. Look for him to have a bounce back game agains Desoto Central.

Of course the one time I pick Oxford to have a blowout win, they struggle.  If the offense plays like it did in the first half last week, they could be facing an upset here against Desoto Central. But, I’m still rolling with the Chargers to win this year’s matchup against the Jaguars. Charger win 38-14.