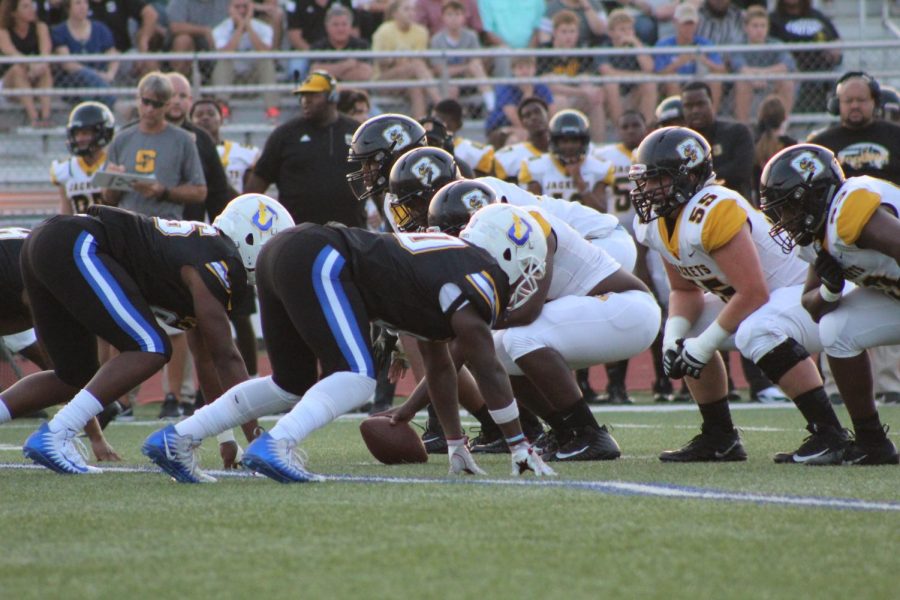 Senior defensive lineman Jeremiah Pomerlee lines up against the Starkville offensive line in last year's loss to Starkville. Pomerlee finished the 2018 season with three sacks, a number which he has already broken this year.

The Oxford Chargers will be traveling north to Horn Lake to take on the defending 6A state champions, the Horn Lake Eagles. The Chargers are coming off of a blowout win at home against Desoto Central, 51-6. The Eagles fared worse last week, losing to Olive Branch 24-14. Last year, the Eagles won a close matchup 28-17 in Oxford.

Oxford WR DK Johnson: Not to be outdone by the other stars on the Charger’s offense, Johnson has put up good numbers so far in his junior year.  He has 270 total receiving yards and two touchdowns, highlighted by a 55 yard touchdown reception.

Horn Lake DT Josaih Hayes: Hayes, a four-star prospect, is one of the best players in all of Mississippi. Standing at 6’3, 280 pounds, Hayes will be a huge problem for whatever Charger offensive lineman he lines up against. The Charger running-backs have struggled yardage-wise as of late, and Hayes will look to help continue that trend.

Oxford DL Jeremiah Pomerlee: Pomerlee has been a wrecking-ball in opponent’s backfields this year, racking up 7.5 sacks and 20 tackles on the year. In the Charger’s single loss on the season, Pomerlee alone had four sacks of Starkville’s Will Rogers. Look for Pomerlee to continue his disruptive play against Horn Lake on Friday.

Horn Lake DL Javarious Johnson: Johnson is Hayes’ “partner in crime” on the defensive line for the Eagles. In last year’s miracle 15-0 state championship run, excluding seniors, Johnson and Hayes led the team in tackles.  Look for the duo to have a big impact on the run game of the Chargers.

The Trenches: Both teams have solid defensive lines that will create disruption in the opposing team’s backfield. With the Eagles having Hayes and Oxford having players like Pomerlee and senior AJ Toliver, each team’s offensive line will be tested all night. Winning these battles in the trenches will go a long way in securing the win for the victorious team.

When it comes down to it, Horn Lake is not the same state-championship winning team as it was last year. Their defense is still very talented, but the offense has struggled heavily throughout the first half of their season. Horn Lake lost to Lafayette 28-14, Oxford beat Lafayette 46-7. Horn Lake beat Desoto Central 14-0, Oxford beat Desoto Central 51-6. While the Charger offense may have a tough time moving the ball against a strong defense, they should still be able to pull out the win, 30-6.