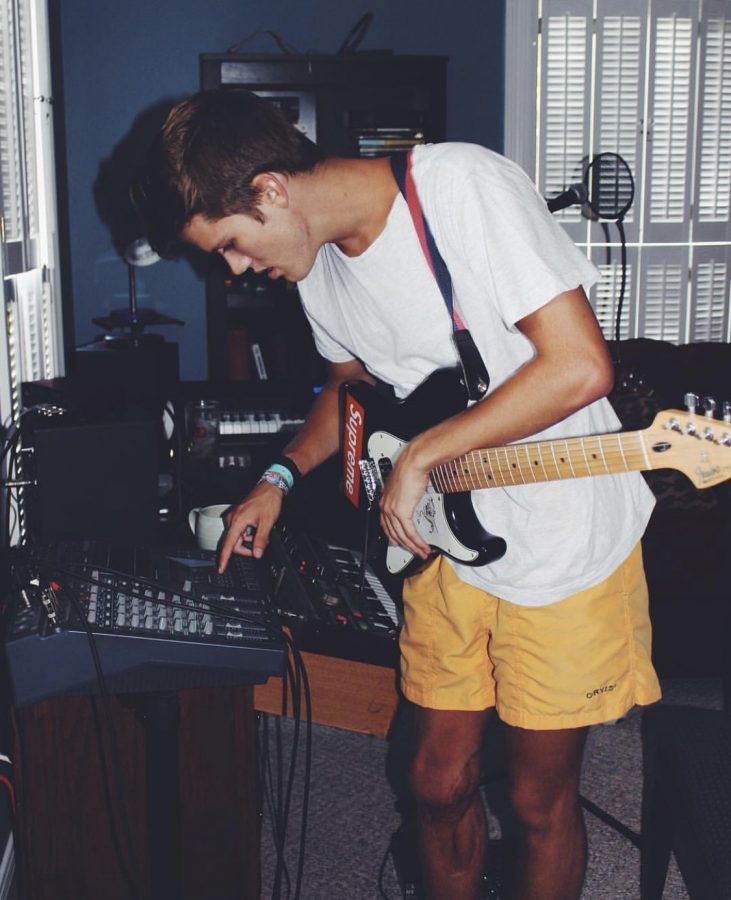 Andrew Newman works on his music in his bedroom in Hattiesburg, Miss.. Majority of his music if recorded and produced here.

Andrew Newman is beginning his senior year at Ole Miss, but his college extracurriculars have been pretty different from most other students. Newman writes and produces his songs under the name “Lo Noom” and has played venues in Oxford such as Proud Larry’s, Lost Dog Coffee, and the music festival Mississihippi, in addition to reach- ing a worldwide audience with 22,656 monthly lis- teners on Spotify.

“In like third grade I started playing guitar and messing around on garage band on the desktop computer that my family had, and writing songs and stuff… It [music] was always something that I enjoyed doing and was something that was always on my mind,” Newman said.

Hailing from Hattiesburg, Miss., Newman be- gan making music when he was very young. In high school, Newman began posting his songs on ser- vices such as SoundCloud and BandCamp, turning his bedroom into a studio. He had no idea he would gain supporters and start receiving the amount of positive feedback that was to come.

“It’s such a cool feeling. I’m very thankful for it. I had no idea, I never thought any of that would happen. I never thought I could get like the amount of plays I’ve gotten. ‘Pretty Woman’ has a ton. I never would have expected that,” Newman said.

When thinking about where he draws inspira-

tion, Newman is unsure himself. He confesses that the randomness of things that catch his attention and inspire him take him by surprise, and that it is hard to pinpoint exact things that come into play during his creative process. He pulls from a broadrange of musical influences, from Kanye West tothe Beatles, that contribute to the diverse, ethereal sound of his music.

“People I’m around or see, situations I’m in, memories I have, music I’m listening to, movies I watch, sounds I hear, it can be anything. I really don’t understand it, like, what it is exactly,” New- man said.

Newman chose the unusual stage-name “Lo Noom” through messing around with his twitter handle, and it eventually evolved to the catchy name. His music doesn’t necessarily have a com- mon theme, but rather he focuses on whatever res- onates with him in the moment.

“I like different things about each one but I feel like the truest, most honest I’ve ever been on a song, which is hard to do all the time, is ‘Blue Noom,’” Newman said. “I just felt like every line of the song was something I could very much get into whenever I sing.”

Newman’s future is uncertain. He will gradu- ate in the spring majoring in Integrated Market- ing Communications, and his plans afterward are up in the air. He might stay in Oxford or move af- ter he graduates, but right now he is not focused on planning for the future. Currently, Newman is working on new music to release, starting with a

single, “Know It All” to be released on Spotify andApple Music on Oct. 6. He will also be working on an album for his thesis that will be released this upcoming year.

“There have been moments where I’m like ‘yes, this is what I want to do’ and then other moments I’m like ‘I don’t know if I can do this,’” Newman said. “I don’t know, anything can happen in life and I could become super passionate about some com- pletely different thing I’m not aware of right now later in life.”