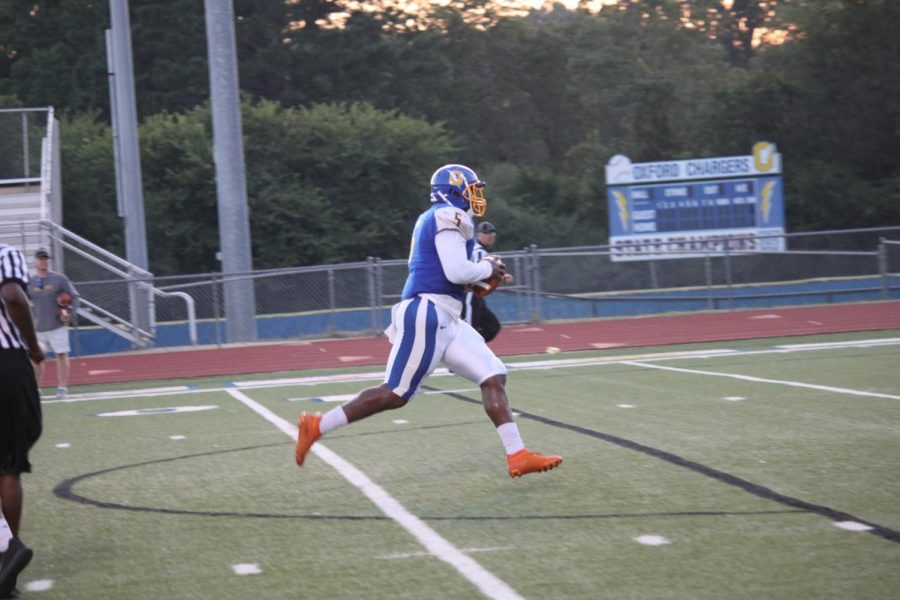 Senior JJ Pegues runs for a touchdown in this season's jamboree against Charleston. Pegues has nine total touchdowns in his senior campaign.

In the biggest division matchup of the year to date, the two undefeated teams in 6A Region 1 are facing off against each other in Olive Branch. The Olive Branch Conquistadors defeated the Southaven Chargers last week 38-14.  The Chargers won a defensive struggle against defending 6A champions Horn Lake in their matchup last week. The last time these two teams met on the gridiron was 1998, where the Conquistadors were conquered by the Chargers 48-40

Oxford ATH JJ Pegues: Olive Branch’s defense is one of the best in all of Mississippi. Pegues, who has been battling a minor injury these past few weeks, is the Charger’s best offensive weapon with nine touchdowns on the season. Against such a talented defense, Pegues will need to be a major factor in the Charger offense.

Oxford DB Scott Norphlet: Norphlet, as a defensive back, is one of the Chargers best tacklers with 55 tackles on the season. It will be a challenge for Norphlet and the rest of the Charger’s defense to make open-field tackles on the Conquistador’s talented running backs, especially Banks.

Olive Branch DT Walter Nolen: The Charger’s offense has struggled against size on the defensive line so far this year. That was shown in the three games they struggled on offense or lost, those being Starkville, Lewisburg and Horn Lake. Nolen, as just a sophomore, stands at 6’3 and 280 pounds. The Charger offensive line will have their hands full with Nolen, who has two sacks and 53 total tackles this year.

Ball Security: Olive Branch’s defense leads the district with 15 interceptions on the season.  Meagher has had five interceptions so far in his senior campaign, with all five coming against Starkville and Lewisburg.  If Meagher and the rest of the Charger offense can limit turnovers and not give Olive Branch more chances to score, they should win.

Coming into the season, Olive Branch was a highly rated team, projected to win many games.  After starting the season with a disappointing 1-2 record, the Conquistadors are back on track having won their last five games.  They haven’t fared as well against opponents that the Chargers also faced, beating Desoto Central, Horn Lake and Southaven by a combined score of 93-40, to the Charger’s 110-24.  Simply put, I think the Charger defense will once again dominate and win the game. Oxford stays unbeaten in district play, winning 24-17.